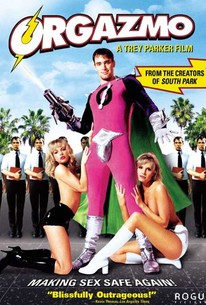 Critics Consensus: More juvenile than provocative, Orgazmo may have enough good-natured raunch to satisfy writer-director Trey Parker's fans, but its satire is too soft to compete with the South Park co-creator's best work.

Critics Consensus: More juvenile than provocative, Orgazmo may have enough good-natured raunch to satisfy writer-director Trey Parker's fans, but its satire is too soft to compete with the South Park co-creator's best work.

Critic Consensus: More juvenile than provocative, Orgazmo may have enough good-natured raunch to satisfy writer-director Trey Parker's fans, but its satire is too soft to compete with the South Park co-creator's best work.

Joseph Arsenault
as Jimmy `The Fish'

Jeff Schubert
as Tommy `The Shark'

Desi Singh
as Randy `The Guppy'

T-Rex
as The Fat Lady Stripper

Massively inventive and spiked with perversely wicked humor, "Orgazmo" is a delightful movie that showcases the multiple talents of Trey Parker as writer-director-star.

I like South Park. It has wit. I guess Orgazmo was a stage the boys had to go through.

They are clearly having fun and playing well off each other.

Parker and Stone are about to take over your funny bone.....A unique, amusing pic

If you're already a fan, consider the Special Edition DVD a must-own; if you've never seen Orgazmo before, be sure to make it a rental first. And hide the kiddies.

.. and his sidekick, Choda Boy!

A film that isn't as funny as it should be, but should have been seen by more people.

The first large scale Hollywood film that Trey Parker and partner Matt Stone undertook, this film has all the musings of a parody, and yet all the intelligence of a teenaged boy. Not that that isn't entertaining, valued, and hysterical at times. If you aren't aware this duo remains the creative minds behind the cartoon show "South Park," but they have also made a lot of feature length films. This is an early film so it's not put together as well as "BASEketball" or "South Park: Bigger, Longer, and Uncut." Still, it has a lot of memorable and quotable moments that really make it a great comedy. That's partially because the main character is so earnest and pure, even in the midst of making a porn film. Lead character Joe Young (Parker) is obviously named for Mormon faith's founder Joseph Smith, and throughout the film he stays as moral as he believes Smith was. He does missionary work in Los Angeles where he meets seedy porn director Maxxx Orbinson (Jacobs) and begins work as an erotic superhero named Orgazmo. Joe just needs some money so he can marry his longtime girlfriend Lisa (Lynne) but the film actually becomes a mainstream hit that makes more money than almost all other films. The rest of the film involves Joe trying to keep it from Lisa and shake off Maxxx's crude ploys to reel him in. It's not the over-the-top film most of its viewers will probably be expecting, because it stays a bit understated. This is surprising since the film scored an NC-17 rating from the MPAA, but that's probably because of the references to orgasms more than the actual content. There isn't much of any nudity, and the jokes don't ever tread into gross-out territory. It's a very likable movie, because it has some absurd moments and Zucker brother like stabs here and there. This is one of their better and solid live action comedy films.

Trey Parker's first full length feature film is a one joke nightmare with jokes that so unimpressive and laugh free that Orgazmo could be recommended as a cure for insomnia. This film a total mess from start to finish, and really isn't funny like Trey Parker's later films such as South Park: Bigger, Longer and Uncut, and Team America: World Police. Orgazmo is a poorly written film that isn't funny. The film relies on one joke the whole film, and I simply can't believe that a comedy written by Trey Parker would be also one of the worst. But it is, but this was made way back when they first started out. The comedic delivery of Trey Parker's and Matt stone's has become more precise and funnier over the years. Orgazmo is a sloppy comedic outing that is poorly written, poorly written and poorly acted. Watching this, I was much looking forward to the ending credits. If you love Trey Parker and Matt Stone's work on South Park and are looking for something different, well this isn't it. Orgazmo is a poor comedy with one laugh throughout the entire film, and the film is poorly done. I hated this film, and I was surprised that Trey Parker and Matt Stone made this. Usually they're funny, but with this one, they scored a mediocre, awful comedy that doesn't deliver and is more boring and stupid than anything I've seen in quite some time. If you're looking for a good comedy, Orgazmo isn't the one. This an awful film that I can't recommend.

Man, was there ever a broad target that Matt Stone and Trey Parker DIDN'T go after?

Orgazmo is the kind of movie that is cheesy to the point that it's obviously meant to be that way. You can't watch a movie like this and think even for a second that it is meant to be taken seriously, or even that it takes itself seriously. And all of this is clear just from looking at the cover box, so you know from the minute that you pick the movie up that you are about to watch an extremely goofball comedy. With that in mind, you can really appreciate Orgazmo for what it is. Trey Parker and Matt Stone, the famous creators of South Park and the hilarious BASEketball, have returned with another comedy, this one with much less taste but at least as many laughs. Orgazmo is the story of a Mormon missionary who inadvertently winds up starring in an adult film in Los Angeles, but who never seems to lose his faith. Trey Parker plays Elder Young, the above-mentioned missionary, and also writes and directs this unusually amusing b-movie. Orgazmo is a straightforward film that has a very obvious intent. It is aimed at the same audience as other infinitely inferior movies like Scary Movie and Scary Movie 2, but it actually succeeds because its creators have some filmmaking talent that goes beyond a simple purge of every disgusting joke that they learned in fourth grade. Parker and Stone are just naturally funny guys, as has become obvious by now, which is why they have managed to take the potential-free combination of the porn industry and a tiny budget and make it into a hilarious comedy. Trey Parker plays Elder Young, a missionary assigned to do his mission work in Hollywood, and in a hilarious run-in with porn director Max Orbison, he ends up defending himself against a gang of thugs and thereby earning a high paying position as the leading man in Orbison's newest porno. Seduced by the offer of a huge amount of money, which he plans to spend on a house for himself and his ridiculous girlfriend (`Jesus and I love you!'), Young agrees to take on the role, provided he doesn't have to do any actual intercourse. Sound like the makings for a great comedy? No? Exactly! That's what makes it so good! This material is total crap, but that's where the comedy comes from! This is a spoof of lots of different types of films, not the least of which are martial arts films, for reasons which you'll just have to watch the movie to see, and it succeeds on many different levels. The characters are hilarious (there is a truly classic moment when Choda Boy explains to Young that, believe it or not, he doesn't get a lot of action from women. The fact that he's strapping a dildo to the top of his head might have something to do with that.), and there are just some great scenes. The movie is aware of its place, and it doesn't try to pretend that it is something that it's not. Get a bunch of your buddies together and have a couple beers while you watch this movie, you'll love it.