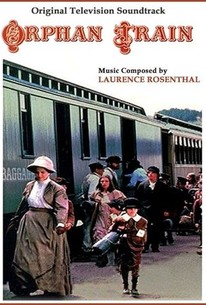 In the second half of the 19th century, some 100,000 abandoned or poverty-stricken New York children were relocated to midwestern families by the Children's Aid Society. Made for television, Orphan Train is a fictionalized account of the early days of the Society in 1854. Top billing goes to Jill Eikenberry as a minister's daughter and Kevin Dobson as a photojournalist. Eikenberry shepherds the first group of orphans from New York to Pennsylvania, Ohio, Illinois and Indiana, with Dobson along for the ride in hopes of getting the exclusive story. En route, the orphans encounter hostility from so-called "respectable" people and danger from a fire and a train crash. The supporting cast includes Glenn Close, five years away from her theatrical-movie debut in The World According to Garp. Based on a novel by Dorothea G. Petrie, Orphan Train was initially telecast December 22, 1979.

Melissa Michaelsen
as JP
View All

There are no critic reviews yet for Orphan Train. Keep checking Rotten Tomatoes for updates!

There are no featured reviews for Orphan Train at this time.