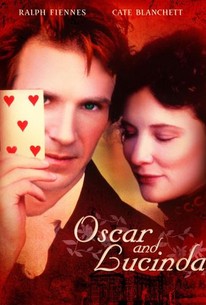 Australian director Gillian Armstrong directed this Laura Jones adaptation of Peter Carey's 1988 Booker Prize-winning novel. In a lengthy flashback, Oscar Hopkins' great grandson (Geoffrey Rush) narrates the family history that led to his birth. On an Australian farm, Lucinda Leplastrier was tutored by her intelligent mother, a woman who took part in the early feminist movement. Oscar's lonely boyhood in rural England was under the watchful eye of his preacher father. At Oxford to train as a minister, the adult Oscar (Ralph Fiennes) feels he doesn't fit in and develops a passion for gambling, giving his winnings away to the poor. Oscar and Lucinda (Cate Blanchett) meet aboard a ship; he's off to the outback to work as a missionary, and she's returning from London after buying equipment for her glass factory. As mutual misfits, they have an instant attraction and quickly grow close, developing a romantic relationship based on trust. However, the Rev. Dennis Hasset (Ciarán Hinds) and Lucinda are friends, sharing an interest in glass. Convinced they are in love, Oscar embarks on an unusual and difficult task, building a glass church for the reverend, an ambitious project to attempt in the remote wilderness. ~ Bhob Stewart, Rovi

Will Barton
as College Student

Critic Reviews for Oscar and Lucinda

This is after all a Gillian Anderson picture, which means the film's physical production is just as impressive as its spiritual apsiration; Cate Blanchett, in a role originally intended for Judy Davis, is bound to become a major star

There's a lack of dramatic focus, and the leads fail to evince any particular chemistry.

Oscar and Lucinda begins with the look of a period literary adaptation, but this is not Dickens, Austen, Forster or James; Carey's novel is playful and manipulative, and so is the film.

Fiennes and Blanchett have a special magic and air of giddy humor about them when they are together.

One of those quiet, compelling romances that gives you hope that there is a round hole for every square peg out there.

Poetic and poignant film about two oddballs who are destined to meet and to fill each other with delight.

After a promising opening, the film meanders so much I thought it would never end.

Audience Reviews for Oscar and Lucinda

The mid 1800's is a tough time to be a lady or gentleman. Oscar and Lucinda are meant for each other, but they have to fight through society's rules and Oscar's fear of water. The scene of the glass church floating down the river is pretty cool.

Odd, overlong character drama which during the later stages echoes Werner Herzog's Fitzcarraldo. I lost interest in Oscar's decline as he's not really a person who earns much empathy. Cate Blanchett leaves a mark as Lucinda though.