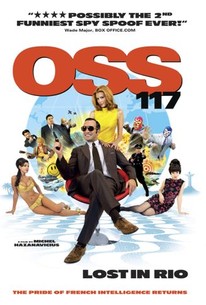 As adapted from Jean Bruce's endless series of novels, the French series of OSS 117 adventure comedies showcase the globetrotting exploits of Hubert Bonisseur de la Bath (aka OSS 117), a Derek Flint-like super-spy. This outing finds OSS 117 shuttled off to Rio de Janeiro, where his assignment involves retrieving microfilm that lists French Nazi collaborators during World War II. He then teams up with the seductive lieutenant Dolores (Louise Monot) to track down a gang of escaped Nazis.

Moon Dailly
as The Countess

What makes Lost in Rio more entertaining than it should be is the few elements of misappropriated nostalgia that rise above the rest of the film's lunk-headed posturing thanks to good comic timing.

All this is mighty silly, but there's something to be said for watching a French movie that, for a change, isn't about l'amour, existential angst, or madness.

The tenor, tone and immaculately lampooned art direction often make up for shtick that gradually grows thin in the belly-laugh department.

Can't overcome the fact that it's sending up a 007 series that -- with the exception of 2006's superb Casino Royale -- already plays like a parody of itself.

Strutting around like a rooster in a thin-lapeled suit, 117 isn't much different from other comic Bond figures, but the movies find a fresh and exceedingly rich vein of comedy in his airy sexism, racism, and colonialism.

Sequelitis is apparently not purely an American phenomenon.

Less cohesive and less funny than its predecessor, completely lacking the creative spark that made Cairo, Nest of Spies such a riotous joy.

It looks like this '60s spy spoof series has already lost its mojo.

... when all else fails, [Jean] Dujardin's smug grin and oblivious conviction in his every knee-jerk prejudice makes the character work.

Stupid, racist, sexist and yet weirdly lovable, bumbling detective Hubert de la Bath is back in O.S.S. 117: Lost in Rio.

The best thing about this French comedy is its delicious '60s visuals with all the clumsy zooms and split-screens, and while the laughs are not so plentiful, the story has many inspired nonsensical moments in this fun spoof on the 007 series and spy movies in general.

This pre-dates the fame of Jean Dujardin in America, but was a breakout role for the comedy actor from France. In the sixties and seventies there were a string of French spy films with a male protagonist named OSS 117, who is now featured in this second film of the new series as a complete clod in comparison. In this film, such as Peter Sellers turn as James Bond in Casino Royale, OSS 117 is reworked as slightly bumbling. More so than that he is misogynistic, racist, and playfully arrogant and ignorant. Unlike a low budget parody film this was actually shot in relatively beautiful locations, with actual cinematography and principal photography to boot. It utilizes many forms of split screen, and is a finesse of French cinema, not only as an ode but as an actual spy film. What also sets it apart from the crass American counterparts such as Spy Hard and The Naked Gun, is that this film actually holds more than comedy, but an air of sophistication and restraint. Better than that, while the usual spy parodies have a makeshift cast of people who are truly enthralled by this uncouth person, this film lets the Israeli Mossad romantic lead hold her own amongst the male spies. She outright points out his faults and tells him about them in as mean a way as possible. Dujardin is in his own league here, as he maneuvers between likable and downright repulsive. His scenes are usually full of bandying about words that are intentionally offensive, while also being goofy and lovable in some respects. The villains are unbelievable, the storyline is epic yet ridiculous, and the shots of the film really resonant and bewilder with how amazing they are for the content. Beside that there is actual humor that relates to American sensibilities and somehow mimics the parody films of Leslie Nielsen. The only reason I didn't fully love it is that it doesn't always translate well, and my comedic choices are usually not as suave and as witty as this, so for myself it was a different kind of experience. Still, this is a delight and is worth our attention.

Jean Dujardin is absolutely perfect in the role of the charming, quintessential French spy of the 1960s, OSS 117. Lost in Rio is slightly weaker in wit than its predecessor Cario: Nest of Spies, but I suspect that has much to do with the French-language jokes not translating to English so well.

James Bond spoof, well, actually direct spoof of another french movie spy also called OSS 117, but the spirit is the same. It portrays the character just as the Bond archetype is, but without any glamorous touches: a racist, misogynist, a smug idiot with a suit and a gun. Ignorant and stupid, only interested in screwing women and looking cool in every possible situation. A bufoon that confuses "personality" with acting like a jerk. But yet, OSS 117 is not a bad man and actually ends up being a rather charming bufoon. Jean Dujardin could not be any more perfect in the main role, the supporting cast is equally great, the jokes are funny, the homage to old spy flicks is spot on, the script is clever. I should kick myself for watching this just until now, can't wait for more films on the series, this being the second.