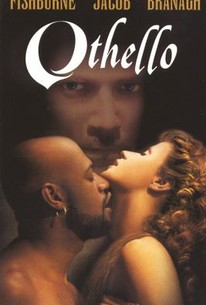 Critics Consensus: Perhaps less than the sum of its parts, Othello is still highly entertaining, and features excellent performances from Laurence Fishburne and Kenneth Branagh.

Critics Consensus: Perhaps less than the sum of its parts, Othello is still highly entertaining, and features excellent performances from Laurence Fishburne and Kenneth Branagh.

Critic Consensus: Perhaps less than the sum of its parts, Othello is still highly entertaining, and features excellent performances from Laurence Fishburne and Kenneth Branagh.

Actor Oliver Parker made his directorial debut with this adaptation of the tragic play by William Shakespeare that abridges the original text by half and ups the quotient of sex and violence. Laurence Fishburne stars as the Moorish general Othello, who returns a hero after crushing an invasion attempt by the Turkish army near Cyprus. Pledged to marry the lovely Desdemona (Irene Jacob), Othello ignores the advice of his intended's father, who tells him that she may have a deceptive nature. Othello's aide Iago (Kenneth Branagh), jealous over the elevation of his rival, Cassio (Nathaniel Parker, the director's real-life brother) to lieutenant, begins scheming to make Othello believe that Desdemona and Cassio are carrying on an affair. On the slimmest of evidence, Iago manages to manipulate Othello's suspicious, distrustful nature. Played previously in black face on film by actors Orson Welles and Laurence Olivier, Parker's production of Othello (1995) was the first major cinematic production to cast an African-American in the title role.

Gabriele Ferzetti
as The Duke of Venice

Pierre Vaneck
as Brabantio
View All

A highly engaging attempt at Shakespeare's most domestic tragedy.

Mr. Branagh's superb performance...guarantees this film an immediacy that any audience will understand.

Davies has done an admirable job of condensing the sprawling action.

Parker has shown how involving and moving Shakespeare can still be on the screen.

The movie is roughly on the same cinematic level as the Mel Gibson Hamlet, though it tends to get under your skin a little more once it gets rolling.

Parker, whose screenplay strips down the original play, merely produces a lackluster essence.

Like its hero, Oliver Parker's Othello starts mightily -- resplendent and captivating -- before crumpling under the weight of misguided choices and self-delusion.

Laurence Fishburne is an actor of no little talent, but he lacks Othello's martial bearing and heroic stature.

Branagh, as Iago, is so obviously the best thing in this largely uninteresting interpretation that you feel sorry for him when he inevitably bites the big one.

A decent but not great version that makes Shakespeare's reliable play accessible, but the acting is uneven: Branagh is witty as Iago, Fishburne looks but doesn't sound right, and Jacob is pale as Desdemona.

The evil Iago(Kenneth Branagh) pretends to be friend of Othello(Laurence Fishburn) in order to manipulate him to serve his own end, comes up with a devious plan to suspect that Othello's wife Desdemona(Irene Jacob) of infidelity. Oliver Parker's directorial debut is a bit of a disappointment. The language is so hard to comprehend(unless you are familiar with Shakespear's vocabulary), the cast is kinda distracting(thanks to Jacob since she still sounds French) and Kenneth Branagh as the evil snitch Iago, he mostly does his Woody Allen homage by talking to us in front of the camera. Laurence Fishburn as Othello is kind of on the quiet side since I felt this film wasn't about him but about his jealous friend Lago who wants Othello's power.

Fishburne's Othello has more more money associated with it than Welles' work but it is nonetheless as effective thanks to Laurence himself and a darkly effective Iago played to the hilt by Kenneth Branagh.

this was a great film. not quite the entire original story, but a great film with good acting. the themes in this sory are powerful and the degredation of the likeable othello is dissapointing but interesting to watch.

Recommended only to those who haven't yet seen enough Shakespeare on film.