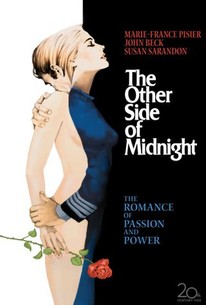 The Other Side of Midnight Photos

One woman's life of love and larceny is recounted in this soapy drama based on the best-selling novel by Sidney Sheldon. In the midst of WWII, innocent French girl Noelle Page (Marie-France Pisier) falls in love with dashing American pilot Larry Douglas (John Beck). When Larry is given new orders taking him back to America, he tells Noelle that he'll come back for her -- when he doesn't, she becomes bitter and pledges to use men for their money and power, not for love. Noelle goes on to become a famous actress and weds Constantin Demeris (Raf Vallone), a Greek multi-millionaire. But she can't shake her passion for Larry, and eventually she hires him to work as her personal pilot. While at first he does not recognize her, soon Larry and Noelle are once again involved in a torrid affair, and when Larry's wife Catherine (Susan Sarandon) refuses to give him a divorce, he and Noelle begin planning a scheme to arrange an "accidental" death for Catherine. The Other Side of Midnight marked the American debut of actress Marie-France Pisier, following her role in the international success Cousin, Cousine.

Roger Til
as Hotel Detective

Titos Vandis
as President of Council

Than Wyenn
as Greek Priest

Critic Reviews for The Other Side of Midnight

When one has to use Valley of the Dolls for comparison, well, you can rest assured that The Other Side of Midnight is not about to become a classic motion picture.

The film is disappointing from all points of view. [Full Review in Spanish]

Audience Reviews for The Other Side of Midnight

Lurid twaddle at least has beautiful location shooting and good work from Susan Sarandon to recommend it.

Very good movie :) Susan Sarandon was fantastic as always and Marie-France Pisier played her part well as the french whore.

The Other Side of Midnight Quotes