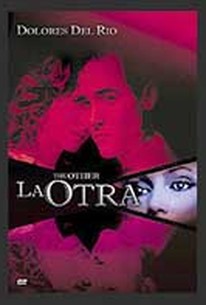 The lovely Dolores Del Rio has an acting field day in the Mexican La Otra (The Other). Del Rio plays twin sisters, one the wife of a millionaire and the other a poverty-stricken manicurist. Seething with jealousy, the manicurist kills her wealthy sister and takes her place. Little does the "bad" sister know the mess she's inherited from the "good" sister-who as it turns out wasn't so good after all. Scripted by Hollywood veteran Rian James, La Otra was remade in 1964 as Dead Ringer, with Bette Davis taking over the Dolores Del Rio part (or parts); this film in turn was remade as the 1986 Ann Jillian TV movie The Killer in the Mirror. ~ Hal Erickson, Rovi

Critic Reviews for La Otra (The Other One)

The fatalism and romanticism of [director Roberto] Gavaldón's film do not lag behind those of Hitchcock. A masterpiece. [Full review in Spanish]

There are no featured reviews for La Otra (The Other One) at this time.

La Otra (The Other One) Quotes