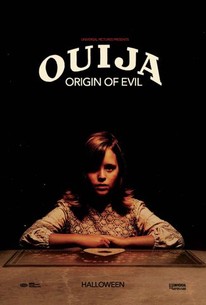 Critics Consensus: Ouija: Origin of Evil swerves its franchise's planchette unexpectedly to YES with a surprisingly scary and dramatically satisfying follow-up to its lackluster predecessor.

Critics Consensus: Ouija: Origin of Evil swerves its franchise's planchette unexpectedly to YES with a surprisingly scary and dramatically satisfying follow-up to its lackluster predecessor.

Critic Consensus: Ouija: Origin of Evil swerves its franchise's planchette unexpectedly to YES with a surprisingly scary and dramatically satisfying follow-up to its lackluster predecessor.

This is not a subversive horror film by any stretch, but it is regardless a satisfying, visually striking one.

None of those rules apply here. It is literally every man, woman, and child for his- or herself. Which is the refreshing part about this film and, perhaps more importantly, it revives the franchise.

Ouija giddily zips between haunted house thriller, exorcism drama and skillful period piece, all wrapped up in a neat and terrifying little bow.

[It's] a largely silly, disjointed construction of run-of-the-mill scares and awkward priest jokes, but at least director Mike Flanagan gives it his best shot, which is more than we can say of his predecessor.

The first hour keeps the suspense admirably taut, the 1967 period setting and sense of domestic claustrophobia bringing a twist of style that puts this way ahead of the first ho-hum chapter.

The fact Ouija: Origin of Evil exists is minor marvel in and of itself considering how little is thought of the first film. The fact it's good? Potentially even great?...I don't even know what to say.

Far better than it needs to be, Flanagan's smart, creepy prequel is a perfect companion piece to Oculus for its interest in murky family dynamics swept up in otherworldly phenomenon.

Who would have thought that incorporating well-rounded, relatable characters would make your horror film so effective? Mike Flanagan, that's who.

Ouija was one of the lamest mainstream horror films of recent memory, its prequel is one of the best.

With Mike Flanagan directing and cowriting, this film far eclipses its predecessor.

As a viewing option for the Halloween season you could do worse, but you could also do better.

No need to visit the first movie. Really, don't. But this Halloween, Ouija: Origin of Evil is your one stop shop for cinematic terrors.

Full of chills, Ouija: Origin of Evil is a frightful and disturbing horror film. The story follows a single mother in the late '60s who runs a séance business with the help of her two daughters, and when she incorporates a Ouiji board into her act her youngest daughter begins communing with the spirit world. Starring Elizabeth Reaser, Lulu Wilson, Annalise Basso, and Henry Thomas the cast is a fairly good and gives strong performances; particularly Wilson, who really sells the spiritual possession. And writer/director Mike Flanagan does an excellent job at bringing intensity and suspense to the film. However, as a prequel its ending is already set and it's restricted in what it can do. Still, Ouija: Origin of Evil is a compelling supernatural thriller that's darker and scarier than the original.

Infinitely better than the first Ouija movie, this intelligent prequel understands quite well how silence can be much more terrifying than loud noises, giving us also time to care about the characters and cleverly subverting the most stupid clichés of the genre.

This is definitely the year for horror films. When the announcement was made that a second Ouija film was in the works, I naturally just rolled my eyes, thinking what else is knew? Well, apparently a lot. Ouija: Origin of Evil improves over its predecessor in every conceivable way. Truthfully, I have grown tired of the way horror films are made nowadays, and while there are a few great ones out there, the same cheap thrills seem to be recycled over and over again. Director Mike Flanagan (of Oculus and Hush fame) presents this film in a way that makes it feel completely distant from its predecessor, while also borrowing elements and expanding on them. I can't believe I am talking this way about a sequel to a pretty terrible horror film, but anything is possible I guess. Here is how Ouija: Origin of Evil did for Ouija, what Fast Five did for the Fast & Furious franchise. There are very few franchise that are able to build off of a story that never worked in the first place. Ouija: Origin of Evil is one of those rare films that is not only better that its predecessor, but rejuvenates the franchise into something surprisingly great, all while still telling the same basic premise. Just like the first film, this one follows a family as they explore the Ouija board game. Instead of just communicating with the dead and having no real emotional heft like the first film, this is more of a look into lost family members. Running a fortune teller business from their home, the Zander family (who had lost their father figure in the past) soon discover the Ouija board, which allows them to communicate with him. Adding just enough emotional gravitas to the premise, while significantly improving its chilling imagery, everything about this film is improved. We can all admit, at least those who have seen the original Ouija, that this franchise needed to play every card in order to win back its audience. The first act of this film worried me, as many of the tropes used throughout the first film were being repeated. It almost felt like a remake, but with much better cinematography, a classic feel, and significantly improved performances and emotional weight. For those reasons, I could already tell the second and third acts would only get better from then on. Happily, I could not have been more right. Ouija: Origin of Evil, although its story is familiar, does its thrills in the third act better than any horror film in have seen in recent years. The funny thing about that statement is the fact that you have pretty much seen every scare before, but this film is able to pull it off with ease. Chills were sent down my spine on multiple occasions. That being said, even though this film puts a spin on a classic tale, that classic tale does feel overdone a few times throughout this film. From kids/creatures crawling up walls, to generic jump scares, to religious beliefs increasing the fear in everyone in the film, Ouija: Origin of Evil does not seem to be going for anything new. Having said that, each time one of these things occur, it is done in a way that still surprises you and the family aspect enhances every single moment of this film. I was tearing up as my spine was tingling, hoping everything was going to be okay. The biggest issue with this film is that you spend the entire duration hoping for something original to happen, due to the fact that the story seems too familiar. I went from loving to disliking this film on multiple occasions, but I guarantee if you know that going in, you may just end up calling this a great horror film. When it comes to selling a horror flick to a mainstream audience, they will chuckle at any opportunity given to them. During my showing of Ouija: Origin of Evil, a few people were audibly heard laughing out loud at some of the surprises or lines of dialogue given by the little girl, played by Lulu Wilson. As the film progressed, those chuckles quickly turned into gasps and you could have heard a pin drop in the theatre. It does take about 20-30 minutes to really get into this film, but by the second and third acts you are hooked in for a very, very good horror film. With improved direction, cinematography, its classic horror feel, and performances that elevate the over-arching family dynamic, Ouija: Origin of Evil is one of the best horror films of 2016, and that is actually saying something, seeing as there have been quite a few good ones. Very solid horror film that I recommend to any fan of the genre.

The sequel and prequel to the critically panned Ouija, Ouija: Origin of Evil is about a family contacting the dead through the titular board game, only to have the youngest possessed by something demonic. Now the first film wasn't great, it was watchable but nothing memorable that probably didn't warrant a sequel...but yet here we are. Interestingly though the sequel is much better, it's just a shame it is still missing something. Firstly the acting was great, the youngest of the family was genuinely creepy, the older sister was a typical teenager but had some depth and the mother had an emotional past...this all sounds like a typical horror movie but the characters were handled with extra care. Thankfully the script was able to elevate the characters slightly, it was sharp and concise with some excellent dialogue between the family members. The direction was great with slowly panning camera angles, a few one take shots and also throwing in some quick cuts to create the creepy atmosphere. The runtime was adequate, at 99 minutes it was not too long and was not too short so the story was perfectly developed. So what was missing? The story itself had no substance and that means not being invested in the characters. It was all very predictable and tedious and the problem with being a prequel is that we know how the film ends. There was no room for twists in the plot, therefore remaining formulaic and unfortunately that means it is boring. A horror film is not a horror film without scares, so how scary is it you ask? It's hit and miss. Some of the scares are executed well and retain the tension however the majority of them are cheap jump scares. Just loud noises to scare the viewers and unfortunately this is becoming a common trait in most hollywood horror movies. A lot of these jump scares are also predictable and just don't deliver the chills it needed to...didn't help I was in a cinema full of teenagers who had to laugh every time they got scared. Overall, Ouija: Origin of Evil was a much better executed film compared to its predecessor, but the story lacked substance and was full of cheap jump scares. - Review at: http://www.themoviediorama.com