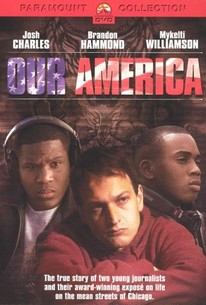 Former Spike Lee cinematographer Ernest Dickerson directs this docudrama about boys, whose exposé of their lives rubbed some people the wrong way. Our America is based on an award-winning nonfiction book about a pair of African-American boys, Lloyd Newman (Brandon Hammond) and LeAlan Jones (Roderick Pannell), who gained fame after creating an award-winning series of National Public Radio pieces about their life in Chicago's Southside Ida B. Wells Housing Project. The drama amplifies when local community leaders object to the pieces and accuse the radio producer David Isay (Josh Charles) of racism. Vanessa Williams rounds out the cast as a school principal. This film was screened at the 2002 Sundance Film Festival.

Vanessa A. Williams
as Sandra

Critic Reviews for Our America

[A] really strong work from start to finish.

Audience Reviews for Our America

The movie is based on a true story of two boys growing up in the projects of Chicago. They get the opportunity to be reporters for NPR. They bring equipment with them to school and around the community to show what goes on in their daily lives. The documentaries they made were controversial and original. This movie gave an insightful look at the situation and the lack of future image the residents of the inner-city projects experience. One of the boys had no future and the other may have had a future, with help they both had a bright future. Anyone studying a career in Justice or Juvenile Justice should watch this. 3 Stars 7-23-13