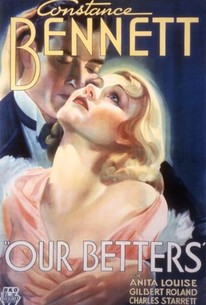 Our Betters is adapted from Somerset Maugham's play about the shallowness and hypocrisy of the idle rich. American heiress Constance Bennett snares a titled British husband (Alan Mobray), but when she discovers that he is merely marrying her for her money, she decides to carry on a few affairs of her own. Going from wide-eyed innocent to bitter cynic, Bennett tries to maneuver her own sister (Anita Louise) into a titled marriage so that the "gravy train" of privileges and sexual liaisons will never end. Bennett ultimately ends up alone and miserable, though she retains her wealth and puts up a good front right to the final fade-out. Maugham's original play was intended to satirize wealthy Americans who buy their way into European society, but the film version of Our Betters is far rougher on the Continental Set than it is on Constance Bennett. ~ Hal Erickson, Rovi

Phoebe Foster
as Flora
View All

Critic Reviews for Our Betters

The plot offers nothing... rather, it gives the performers the opportunity to show off in the roles entrusted to them. [Full review in Spanish]

There are no featured reviews for Our Betters at this time.