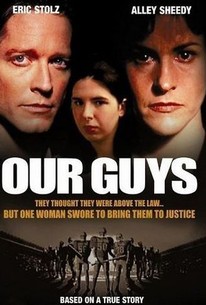 First broadcast by ABC on May 10, 1999, Our Guys: Outrage at Glen Ridge was based on a true story. Heather Matarazzo is cast as Leslie Farber, a developmentally challenged teenager attending an upscale high school in Glen Ridge, NJ. When a group of the school's most popular athletes are accused of gang-raping Leslie, their defense is that the girl "asked for it." A conspiracy of silence quickly encircles the town, with parents and teachers alike united in their efforts to protect the athletes from prosecution. But detective Kelly Brooks (Ally Sheedy) and prosecutor Robert Laurino (Eric Stoltz) aren't about to allow Leslie's attackers to go unpunished. Amidst many clinical discussions of sexual assault and sodomy, the film reflects the then-current Monica Lewinsky scandal by including a scene in which poor Leslie is secretly tape recorded by a so-called "friend." Based on the book by Bernie Lefkowitz, Our Guys: Outrage at Glen Ridge was retitled simply Outrage in Glen Ridge when it aired over the USA cable network in February 2002.

Critic Reviews for Our Guys: Outrage in Glen Ridge

There are no critic reviews yet for Our Guys: Outrage in Glen Ridge. Keep checking Rotten Tomatoes for updates!

Audience Reviews for Our Guys: Outrage in Glen Ridge

Really good for a tv movie. Quite engrossing true story about a team of football players who take advantage of a mentally handicapped teenager played wonderfully by Heather Matarazzo. It never looks like more than a tv movie, but acting is perfect and story is horrible, but keeps you watching.