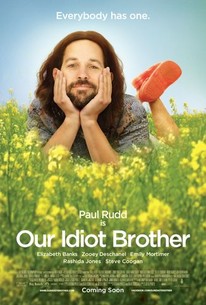 Critics Consensus: It's decidedly uneven, but like Paul Rudd's performance in the title role, Our Idiot Brother is too charming to resist.

Critics Consensus: It's decidedly uneven, but like Paul Rudd's performance in the title role, Our Idiot Brother is too charming to resist.

Critic Consensus: It's decidedly uneven, but like Paul Rudd's performance in the title role, Our Idiot Brother is too charming to resist.

Every family has one: the sibling who is always just a little bit behind the curve when it comes to getting his life together. For sisters Liz (Emily Mortimer), Miranda (Elizabeth Banks) and Natalie (Zooey Deschanel), that person is their perennially upbeat brother Ned (Paul Rudd), an erstwhile organic farmer whose willingness to rely on the honesty of mankind is a less-than-optimum strategy for a tidy, trouble-free existence. Ned may be utterly lacking in common sense, but he is their brother and so, after his girlfriend dumps him and boots him off the farm, his sisters once again come to his rescue. As Liz, Miranda and Natalie each take a turn at housing Ned, their brother's unfailing commitment to honesty creates more than a few messes in their comfortable routines. But as each of their lives begins to unravel, Ned's family comes to realize that maybe, in believing and trusting the people around him; Ned isn't such an idiot after all. -- (C) Weinstein

Kelly Briter
as Girl With Jeremy

News & Interviews for Our Idiot Brother

View All Our Idiot Brother News

Critic Reviews for Our Idiot Brother

What I liked about the film is that there is a very good cast. I think all the women in the film are terrific actors.

A pleasant-enough trifle that ensnares itself in the uneasy middle ground between indie drama and dumb-guy comedy.

Rudd brings color and dimension to a borderline-simpleton schlub who could have easily become a one-note cliché.

It provides a pleasant buzz while it unfolds but vanishes quickly in a puff of smoke.

Strange, then, how Our Idiot Brother wastes its lone asset -- there's not enough idiot, and far too many boring savants.

It's rare that summer ends on as sweet a note as Our Idiot Brother.

There isn't a weak link in the cast.

A completely charming film that features an endearing performance from Rudd. Without him, the film would flounder awkwardly.

This is a warm, engaging film that may not be laugh-out-loud funny... but it's still full of wit.

It's not a bad movie, by any means. But it's disappointingly mediocre, especially given the caliber of talent assembled here.

Our Idiot Brother is an okay movie, a pretty good comedy, and a stellar vehicle for star Paul Rudd.

Audience Reviews for Our Idiot Brother

Ned: I like to think that if you put your trust out there; if you really give people the benefit of the doubt, see their best intentions, people will rise to the occasion. "Everybody has one." Our Idiot Brother may be what you expect, but it may also be a big surprise if you go into it expecting a comedy like we're expecting to see come out today. It's not as raunchy, it's definitely not as mean as most, and it just has an overall niceness to it. A lot of this "niceness" comes from our lead, Ned, who is one of those guys that's so nice, it makes him look dumb. He's a guy so nice that he'd trust someone to hole all his cash on a subway while he cleans up a mess. He's a guy so nice that he'd sell weed to a police officer, as long as the police officer acted sad and said he had a bad week. Ned just believes that everyone is as nice and honest as he is. Too bad that's not the world that we all populate. Ned is imprisoned early on in Our Idiot Brother for selling weed to a police officer. Once he gets out, he goes to his old place of residence; an organic farm, where he used to live with his girlfriend. Upon arriving he sees that his girlfriend has gotten a new Ned, someone just as dumb and just as nice to take Ned's place. After leaving the farm and Willy Nelson(his dog), he goes back to his family. From their he moves in with each of his three sisters at some point, complicating their lives because of his honest ways.  Along with some pretty stellar writing, a great cast makes his movie a lot of fun to watch. Paul Rudd is perfect as Ned, and his three sisters are made u of Elizabeth Banks, Zooey Deschanel, and Emily Mortimer. Four siblings for a comedy like Our Idiot Brother doesn't get too much better than those four. The movie also has a beautiful theme at the heart of it and it's one of those few mainstream comedies that I like because of its themes and not because of its over-the-top humor. Our Idiot Brother is a movie worth watching, especially for fans of Paul Rudd, as this is one of his more vibrant and fun performances to date. Even if you don't end up liking the movie for whatever reason, you're still sure to enjoy the character of Ned. We've all met someone like this that throws their trust at everyone and anyone. So while this film isn't going to change your life, it's still well worth a look.

Light hearted comedy wherein a hippie/outcast/knucklehead brings a family of serious types together with the magical power of love and honesty! It's cute.

Thanks to a fun performance from Paul Rudd, 'Our Idiot Brother' is full of charm and gentle laughs. Nothing raunchy, nothing vulgar, just a simple comedy that bursts with a good vibe. It's honest and approachable for any viewer, with a guarantee that you end the film with a smile. It may get a little too light for its own good, but the film should be relished for its relaxed approach and charming central character.