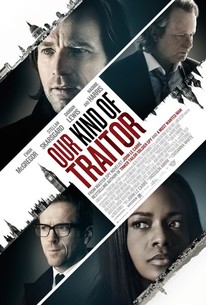 Critics Consensus: Our Kind of Traitor relies on solid writing and acting rather than action to deliver its spy-movie thrills -- and thankfully has the pedigree to pull it off on both fronts.

Critics Consensus: Our Kind of Traitor relies on solid writing and acting rather than action to deliver its spy-movie thrills -- and thankfully has the pedigree to pull it off on both fronts.

Critic Consensus: Our Kind of Traitor relies on solid writing and acting rather than action to deliver its spy-movie thrills -- and thankfully has the pedigree to pull it off on both fronts.

Our Kind of Traitor Videos

Our Kind of Traitor Photos

While on holiday in Marrakech, an ordinary English couple, Perry and Gail, befriend a flamboyant and charismatic Russian, Dima, who unbeknownst to them is a kingpin money launderer for the Russian mafia. When Dima asks for their help to deliver classified information to the British Secret Services, Perry and Gail get caught in a dangerous world of international espionage and dirty politics. The couple is propelled on a perilous journey through Paris and Bern, a safe house in the French Alps, to the murky corners of the City of London and an alliance with the British Government via a ruthless and determined MI6 agent.

Grigoriy Dobrygin
as The Prince

Katia Elizarova
as The Prince's Girlfriend

Critic Reviews for Our Kind of Traitor

It's an intriguing character study embedded in a spy thriller.

It's all far-fetched in a way that only international spy thrillers -- bless their hearts -- can be.

Doesn't have quite the depth or the pedigree of other cinematic versions of his novels...but it's still worth the trip.

McGregor brings depth to the role. He beautifully portrays his character's thinking: His sharp, inquisitive eyes and thin lips seem forever caught between a smile and a grimace.

The mid-summer release of an adult, effects-free British thriller relating to the collapse of Europe's global financial system timed out perfectly. You'll Brexit knowing that your entertainment dollar was well spent.

A handsome and often absorbing picture.

By default Our Kind of Traitor will probably be listed under the "thriller" section on Netflix and elsewhere simply because it was written by spymaster John le Carré but don't be fooled.

It's less apparent now who is good, who is bad and what it might even mean to be one of those things. Our Kind of Traitor reflects this in a way even more timely than anticipated...

... fundamental laziness passes on into the story-telling.

You can never go wrong with John Le Carre on the page or on the big or small screen. Quieter and more reflective than most, Our Kind of Traitor is our kind of thriller.

Our Kind of Traitor is a serviceable and relevant film with little to distinguish it above its compatriots.

Rattles along, but it is one of those tales which is more credible on the page than the screen.

Audience Reviews for Our Kind of Traitor

"Our Kind of Traitor" is my kind of movie: intelligent and suspenseful. Fine acting from all players. Beautifully filmed with strong directing and cinematography. The film is flawless, although some may not like the slow-burn pacing characteristic of Le Carre films. You'll betray yourself if you don't see it.

For anyone who has seen "Miles Ahead" from earlier this year, Ewan McGregor essentially plays his character from that film. He's not really qualified or prepared for the high-stakes environment he enters, he does some blow, he learns how to use a gun, and he does his best to rectify the situation. Most of the time, he just looks confused and out of breath. Stellan Skaaarsgaaard on the other hand acts like he actually did do blow - cursing, spitting, and screwing up his "Russian" accent from 20 minutes in until the end. Honestly, this looks like a BBC original made for TV film. Yeah, there are blurry camera moments after people have done drugs or suffered head trauma, but can't we just get past that laziness? "Fear and Loathing in Las Vegas" came out 18 years ago. And the coy British good-guy cast versus the vague European bad people gave me a few Roger Moore-era Bond laughs. However, regarding the stupid twist at the end, I expected it waaay too early in the film, y'know, when it blatantly showed me that Skarsgard's character has photographic memory. I wish I had anti-photographic memory - not necessarily for this film, but for this "Kingsman" stylized crap in general.

Silly and predictable, this is a lesser John le Carré adaptation that believes to be a smart espionage film but is unfortunately just a lame pile of clichés. Full review on filmotrope. com

As a person who disliked previous John Le Carré adaptations (Tinker Tailor Soldier Spy and A Most Wanted Man), I was pleasantly surprised with Our Kind of Traitor. A tight tense spy thriller that is very realistic and plausible. McGregor and Skarsgard steal every scene, but Lewis and Harris also played their parts well. This wasn't as heavy as many other espionage thrillers, which is great for all viewers. Whilst some may prefer more action and that the villainous group were not really that menacing, this is a nice slow tense ride that I suspect will become very underrated.

Our Kind of Traitor Quotes