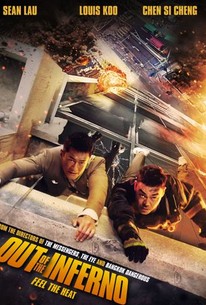 Out of Inferno Photos

Two sibling firefighters battle a high-rise inferno in this fiery disaster film spectacle from Danny and Oxide Pang (The Eye, The Messengers). Stoic Tai-kwan (Sean Lau Ching-wan) and his younger brother Keung (Louis Koo Tin-lok) have devoted their lives to battling blazes. But unlike his older brother Tai-kwan, Keung has a hard time following the rules. As a result, Keung joins their entrepreneurial uncle's fire protection business while Tai-kwan remains with the fire department. On the very day that Keung has an important meeting with some potential investors, however, the skyscraper that houses his luxurious office goes up in flames. Now as Keung guides a group of terrified survivors through a suffocating maze of embers and smoke, Tai-kwan and his fellow firemen fight to contain the devastating blaze. ~ Jason Buchanan, Rovi

Critic Reviews for Out of Inferno

It's a shame to see so much talent and time spent on such an ordinary film.

There are no featured reviews for Out of Inferno at this time.

Out of Inferno Quotes