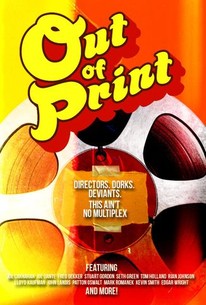 Out of Print Photos

A movie about a movie theater? In a culture where digital movie presentation is taking over, OUT OF PRINT is a unique documentary which explores the importance of revival cinema and 35mm film exhibition as seen through the lens of the patrons of the New Beverly Cinema - an independent revival cinema in Los Angeles. The film features interviews with a who's who of influential independent film creatives including Joe Carnahan, Joe Dante, Seth Green, Rian Johnson, John Landis, Patton Oswalt, Kevin Smith and many more. OUT OF PRINT celebrates the world of Revival and Art House Cinema where 35mm film prints are still going strong, making a strong case for why 35mm presentation should be allowed to coexist with digital forever.

Critic Reviews for Out of Print

At 20 minutes, it would have been delightful. At 90, it's fan non-fiction.

Worth the price of admission.

The final act turns into a plea for the preservation of 35-mm film stock, which may prove to be a lost cause, but give Marchese props for fighting the good fight.

An affable yet thoroughly one-sided documentary...

As Out Of Print goes on, it becomes clear that the film doesn't really have an angle beyond honouring repertory culture in general and the New Bev in particular.

There are no featured reviews for Out of Print at this time.

Out of Print Quotes