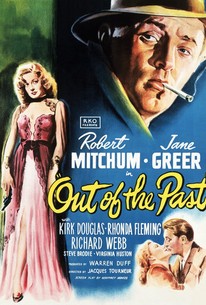 Critics Consensus: Anchored by a wistful Robert Mitchum, Out of the Past is an exemplary noir steeped in doom and sensuality.

Critics Consensus: Anchored by a wistful Robert Mitchum, Out of the Past is an exemplary noir steeped in doom and sensuality.

Critic Consensus: Anchored by a wistful Robert Mitchum, Out of the Past is an exemplary noir steeped in doom and sensuality.

Out of the Past Photos

This quintessential film noir made contract player Robert Mitchum a star and set the standard for the genre for years to come. Private eye Jeff Bailey (Robert Mitchum) is hired by notorious gangster Whit Sterling (Kirk Douglas) to find his mistress, Kathie Moffett (Jane Greer), who shot him and ran off with $40,000. Jeff traces Kathie to Mexico, but when he meets her he falls in love and willingly becomes involved in an increasingly complicated web of double-crosses, blackmail, and murder. Directed with supreme skill by Jacques Tourneur and brilliantly photographed by Nicholas Musuraca, this is an unrelentingly gloomy film set in a dark world of greed and deceit where love is used to trap the gullible. It was here that Mitchum created what became his characteristic screen persona: the droopy-eyed cynic who accepts fate with a studied nonchalance. Jane Greer is equally superb, perfecting the role of the femme fatale with a combination of erotic fire and cool detachment. Her first appearance in the film, in silhouette as she enters a dark cantina from the bright sunlight, is one of the great entrances in film history. A seminal genre film, certainly among the greatest whose influence is still felt today. Out of the Past was remade as the distinctly inferior Against All Odds.

Dickie Moore
as The Kid

Caleb Peterson
as Man with Eunice

Manuel Paris
as Croupier
View All

News & Interviews for Out of the Past

View All Out of the Past News

Critic Reviews for Out of the Past

The players acquit themselves histrionically if not morally. Mitchum, [Kirk] Douglas and the Misses [Jane] Greer and [Rhonda] Fleming are all commendable.

Out Of The Past is undeniably a film noir, and rightly regarded as one of the genre's best.

Each change of angle and shift of light evokes an inner disturbance; the actors seem to push through the dense shadow as through water, revealing fast people in slow motion ...

The most delicate and nuanced of film noirs, graced with a reflective lyricism that almost lifts it out of the genre.

Out of the Past permits the viewer to experience both the immediate drama ... and, at the same time, recognize the presence, which shines through the imagery, of another, even more resonant level of meaning.

[Jacques] Tourneur's pacing and tempo is flawless, and [Robert] Mitchum in a trench coat and full of taciturn machismo is on par with Bogie, who owned the trademark.

As an antidote to post-prandial lethargy it will do yeoman service...

Essential viewing for the noir fan and the kind of movie that could make a neutral third party into a noir fan in the first place.

Audience Reviews for Out of the Past

Mitchum is little more than a big slab of beef walking around in a Macintosh trench coat, mumbling to himself, as all around him conspire in some way to dupe everyone else. He only just holds onto his hat, all the doublecrossing, doubletalking, backstabbing rigamarole going on. Did I mention that there's a bad girl in the middle of it all? Did I have to mention it? And yeah, she's got legs down to there and back up again. I'm gonna need a drink. Make that two.

A stranger uncovers the secret past of a small town gas station owner drawing him back into the shadowy world he was trying to forget. This was Robert Mitchum's first starring role and it's easy to see why it made him a star; he is superb as the ex-private eye who falls for the charms of one of the quintessential femme fatales in the shape of Jane Greer. Kirk Douglas also gives brilliant support as the great manipulator looking for revenge and the web of deceit he weaves makes for an intriguing plot that's complex without being overly convoluted. The icing on the cake is the artistic eye of Jacques Tourneur who makes the film one of the most visually attractive crime dramas ever made. Years ahead of its time, Out Of The Past is one of THE greats of Film Noir.

The director of Cat People strikes again with what may be a perfect noir.

I really got lost with the plot around the middle, something about tax papers and what not. I guess i either didn't pay attention or i'm just stupid. So it will need a rewatch. Also, BITCHES AND WHORES!

Out of the Past Quotes