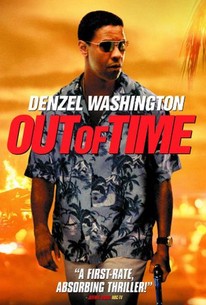 Critics Consensus: A fun and stylish thriller if you can get past the contrivances.

Critics Consensus: A fun and stylish thriller if you can get past the contrivances.

Critic Consensus: A fun and stylish thriller if you can get past the contrivances.

Out of Time Videos

Out of Time Photos

Director Carl Franklin and actor Denzel Washington team up again (following 1995's Devil in a Blue Dress) for the crime thriller Out of Time. Washington stars as Matt Lee Whitlock, the well-respected chief of police in a quiet Florida community. While in the process of getting a divorce from fellow detective Alexandra (Eva Mendez), Matt engages in an affair with his high school sweetheart Anne (Sanaa Lathan). Unfortunately, Anne is married to the extremely jealous Chris (Dean Cain), a former pro football player who works as a security guard. After a major murder occurs in the community, Matt finds himself the main suspect. With the help of his medical examiner pal Chae (John Billingsley), Matt must solve the case before he is found guilty himself. Out of Time premiered at the 2003 Toronto Film Festival.

Dorothy A. Healy
as Woman in Lobby
View All

Critic Reviews for Out of Time

Best for older teens and their parents.

We've seen Washington as this character before, in Fallen, The Bone Collector, The Siege -- not the same character, but similar.

It's a great ride.

I just wish they would have tried a little harder with the script.

But where before the duo were able to set the screen ablaze with sexy passion and old-fashioned double-dealing noir intrigue, this time they're stuck playing with a paint-by-numbers water color set.

The task of keeping this from getting too smart for its own good falls squarely on the dependable shoulders of Washington.

It's the performance by the largely unknown (well, outside of Star Trek: Enterprise fans) John Billingsley that remains the freshest ingredient in this otherwise negligible piece of pulp fiction.

This generically titled mystery thriller is slow to catch on but holds joyous moments of suspense once it kicks in.

In spite of decent performances from the main cast, Carl Franklin's thriller is listless and very weak.

Franklin seems to be aware that the audience knows what is going to happen.

Audience Reviews for Out of Time

A refreshingly great storyline and surprisingly a great Thriller for one of the lesser known Denzel Washington films. The pressure felt by the main character in the movie is portrayed well and felt throughout and provided a constant feeling of frustration of 'if only you'd just ....' Very enjoyable, a great understated Trhiller.

just suppose everything you knew,everything you trusted,became a lie. For Matt Lee Whitlock,(denzil washington) that nightmare has become a reality. when Banyan Key is shocked by a double homicide, Matt starts his investigation,and as details of the case begin to surface, all of the evidence seems to point to Matt as the prime suspect. its really a race against time for matt to solve the murder,before others start to uncover the clues and point the finger at him. love denzil he is one of my fave actors~! i enjoyed this flim

Denzel wearing a Hawaiian shirt for 1.7 hours amongst fine woman and Dean Cain! I must chastise the filmmaker for not including "Out of Touch" by Hall and Oates in the opening or closing credits, would have been perfect. "You're out of touch, I'm OUT OF TIME", that's chocolate icing.

Out of Time Quotes