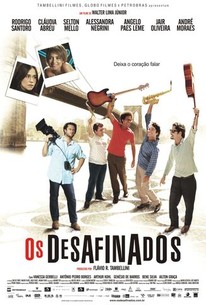 Out of Tune (Os Desafinados) Photos

Brazilian filmmaker Walter Lima Jr. looks back on the turmoil of the 1960's as well as the glories of the bossa nova boom in this musical period drama. Dico (Selton Mello) is a filmmaker who obsessively chronicles the career of his close friends in the group Os Desafinados, a bossa nova band who are on the verge of popular success at home and are earning a following among jazz fans abroad. Os Desafinados are the brainchild of composers Joaquim (Rodrigo Santoro) and Davi (Angelo Paes Leme), who with the help of their rhythm section Paolo Cesar (Andre Moraes) and Geraldo (Jair de Oliveira) are taking dance music into fresh and exiting directions. Their sound impresses Leon (David Herman), an American record producer who offers to bring the group to the United States and help them reach a new and wider audience. Joaquim and Davi eagerly accept the offer, and are jetted to New York City where they play a riotously well-received gig at jazz mecca the Village Vanguard. However, they soon discover Leon is more interested on how he can profit from the success of Os Desafinados than in the welfare of the group, and when Joaquim and Davi meet Gloria (Claudia Abreu), a gifted Brazilian vocalist who has relocated to Manhattan, the two become rivals for her romantic and musical attentions, an especially problematic situation for Joaquim since he's already married to Luiza (Alessandra Negrini). The band's career troubles and internal squabbles suddenly seem trivial, however, when Os Desafinados learn that Brazil's political future is up in the air following a violent military coup. Os Desafinados (aka Out Of Tune) received its North American premiere at the 2008 Guadalajara Film Festival. ~ Mark Deming, Rovi

Critic Reviews for Out of Tune (Os Desafinados)

There are no critic reviews yet for Out of Tune (Os Desafinados). Keep checking Rotten Tomatoes for updates!

There are no featured reviews for Out of Tune (Os Desafinados) at this time.

Out of Tune (Os Desafinados) Quotes