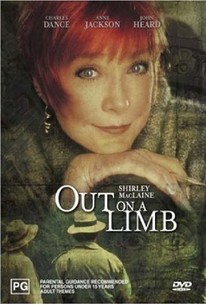 Actress/author Shirley MacLaine described her 1983 book Out on a Limb as the tale of her "personal spiritual quest." In this two-part TV-movie adaptation of the book, MacLaine plays herself, meeting the emotional challenge of passing 40 by entering into an affair with a Socialist member of the House of Commons (fictionalized as "Gerry Stamford" and played by Charles Dance). She also forms a unromantic but deep friendship with an unusual fellow (John Heard) who introduces her to the metaphysical world. Also in the cast are Anne Jackson as feminist Bella Abzug, and real-life "trance channellers" Kevin Ryerson and Sture Johanssen. Part two of this fascinating project finds MacLaine seeking further answers to the riddle of life in the Peruvian Andes. Out on a Limb premiered on January 18 and 19, 1987.

Shirley MacLaine
as Herself

Anki Leden
as Birgitta
View All

Critic Reviews for Out on a Limb

There are no critic reviews yet for Out on a Limb. Keep checking Rotten Tomatoes for updates!

There are no featured reviews for Out on a Limb at this time.

Out on a Limb Quotes