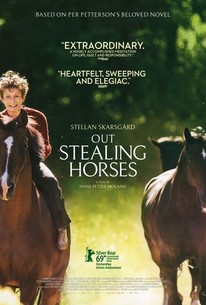 Critics Consensus: Muted but moving, Out Stealing Horses ambitiously explores the human condition through one man's lifetime of memories.

Critics Consensus: Muted but moving, Out Stealing Horses ambitiously explores the human condition through one man's lifetime of memories.

Critic Consensus: Muted but moving, Out Stealing Horses ambitiously explores the human condition through one man's lifetime of memories.

November 1999: 67-year-old Trond (Stellan Skarsgård), lives in self-imposed isolation and looks forward to welcoming in the new millennium alone. As winter arrives he meets one of his few neighbors, Lars (Bjørn Floberg), and realizes he knew him back in the summer of 1948. 1948 -- the year Trond turned 15. The summer Trond grew up. OUT STEALING HORSES is based on the bestselling novel by Norwegian author Per Petterson, which received several important international awards and was included in The New York Times '10 Best Books of 2007 (Fiction)'. Petterson's novels have been translated into more than 50 languages.

Gard B. Eidsvold
as Franz

There's some appreciable serenity and a lot of personal grief on display in Out Stealing Horses, but it's only visible in fits and starts.

What Mr. Moland is after, in tackling an "unfilmable" novel, is evidenced in the visual tone, emotional content and Mr. Skarsgård's mutely eloquent performance.

An ambitious film that examines memory and consciousness through the perspective of an older man who's determined to escape from memory and to constrict his lived experience.

A hugely accomplished meditation on life, guilt and responsibility.

A sensual but disconnected Stellan Skarsgård vehicle about memory and loss.

It's an honest film about a likeable guy, but is too subdued to get you excited.

Just an ordinary movie from Norway starring the extraordinary Stellan Skarsgard. The movie never reaches the level of his talent.

Skarsgård delivers a reliably compelling performance in the film's most poignant moments.

Out Stealing Horses is a solid movie that does a very good visual interpretation of the novel. Although the character of Trond is a specific person, the movie's themes about family dynamics and childhood memories can resonate with many people.

Moland's obvious model here seems to be Terrence Malick, and even if you find the movie underwhelming and confusing, you might appreciate its discrete moments of beauty, especially in the flashbacks.

There are no featured reviews for Out Stealing Horses (Ut og Stjæle Hester) at this time.