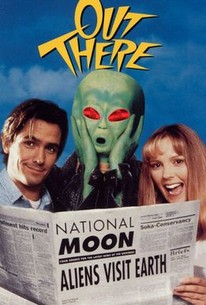 A photographer becomes famous overnight for a photo he didn't take himself in this satiric comedy. Delbert Mosely (Bill Campbell) is an award-winning photojournalist whose career has gone into a nosedive, forcing him to take a job with a sleazy tabloid. After getting fired by his editor, Cobb (Bobcat Goldthwait) for not giving him the kind of exploitive material he wanted, Delbert buys an old camera at a garage sale, which still has some old film left in it. Delbert develops the roll, and finds to his surprise it includes pictures of an alien abduction. Delbert's photos suddenly make him a very popular man with reporters, Air Force investigators, UFO theorists, and Cobb, who runs a story about the photos which question his credibility. Delbert gets in a fight with Cobb that lands him in jail, but he's soon bailed out by Paige (Wendy Schaal), who has her own reasons for wanting to talk to Delbert -- she thinks her father is the one being abducted in the photos. Out There also stars Rod Steiger, Jill St. John, Paul Dooley, and P.J. Soles; Billy Bob Thornton, a year before Sling Blade would make him a star, has a bit part as a UFO enthusiast Delbert meets in jail.

Critic Reviews for Out There

There are no critic reviews yet for Out There. Keep checking Rotten Tomatoes for updates!

Audience Reviews for Out There

There are no featured audience reviews yet. Click the link below to see what others say about Out There!