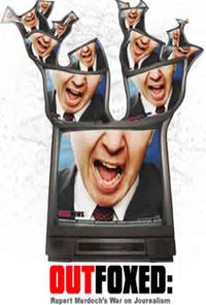 Critics Consensus: Neither fair nor balanced itself, Outfoxed offers an often entertaining indictment of the Fox News Channel.

Critics Consensus: Neither fair nor balanced itself, Outfoxed offers an often entertaining indictment of the Fox News Channel.

Critic Consensus: Neither fair nor balanced itself, Outfoxed offers an often entertaining indictment of the Fox News Channel.

While the Fox News cable network has promoted itself as a "fair and balanced" news outlet -- so much so that they've even trademarked the phrase -- not everyone believes that they're living up to their slogan, and this activist documentary by filmmaker Robert Greenwald takes a close look at the political perspective of Fox's coverage. Outfoxed: Rupert Murdoch's War on Journalism examines the right-wing slant of Fox News' reporting, as represented in stories the network chooses to cover and their shoehorning of editorial opinion into stories, revealed in interviews with former Fox employees and several noted journalists (including Walter Cronkite) who discuss the pro-conservative, anti-Democratic views of the channel's management and how they're manifested in their programming. The film also puts talk show host Bill O'Reilly under the microscope and offers potent examples of his frequently abrasive interviewing style. Production of Outfoxed was supported in part by the leftist political action network Moveon.org.

Douglas Cheek
as Narrator
View All

Greenwald has fashioned a fine attack dog, and he's sicced it on a deserving subject.

Taken for what it is, Outfoxed is still worth watching, especially for the politically active.

Pure partisan warfare of the liberal stripe, to be sure, but that doesn't make it any less disturbing when discussing such a major shaper of public opinion as Fox, whose motto, judging from this film, more accurately should be 'You retort, we deride.'

Makes a crucial argument that has less to do with conservatives and liberals than with the coarsening of political discourse and the sinking standards of journalism and news -- subjects that go far beyond any particular news operation.

While Outfoxed surely will appeal more to liberals than to conservatives, its value to its self-selected audience lies not in upending anyone's expectations, but in taking the uninitiated down the Fox News rabbit hole.

Those with negative opinions of Fox News probably never watch it and may find the ample clips on display here eye-opening.

It's a meticulous dissection of the Fox News network, its politics, methods and overall ambitions. . .

[A] home-run smackdown of the Australian mogul who dominates the American media scene...

The most scrupulous, most focused, most thorough, and arguably most important of 2004's wave of activist documentaries.

Not about anything except the lead-balloon revelation that Fox feeds rage and fuels disinformation with questionable journalistic tactics.

No real surprises here. Most that watch this movie has already seen through Fox News and what it is and represents.

While watching this documentary I could not stop laughing. It has to be the funniest documentary I have ever seen. How can it call FOX news biased, which it probably is, when the documentary itself is biased. A great comedy.