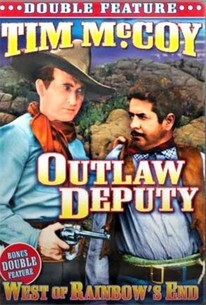 Based on "The King of Cactusville", a 1923 short story by Johnston McCulley, the creator of Zorro, The Outlaw Deputy was the first of ten Tim McCoy Westerns from Poverty Row company Puritan Pictures. When McCoy's friend, Charlie Adams (Si Jenks), is killed by Bill Sanderson, the former cowboy and his gang turn to robbing stage coaches and rustling cattle, but take only what belongs to Sanderson. In the town of Godland, Adams' son, Chuck (George Offerman Jr.), is framed in a payroll robbery by Cash (Bud Osborne), one of Tim's former associates. Tim relieves Cash of the ill-gotten gains and is elected deputy sheriff by a grateful Rutledge (Joseph W. Girard), the payroll boss. Chuck, however, was killed during the robbery by Howger (Hooper Atchley), whose gang has been terrorizing the town. Despite the advice of lovely Joice Rutledge (Nora Lane), Tim is determined to bring Howger to justice. At a church social, Howger, who has learned about Tim's past from Cash, turns the citizenry against the new deputy, who lands in jail. With the help of Joice, Tim makes a daring escape and manages to collect enough evidence to convict Howger for the murder of Chuck. Having outdrawn the villain in a climactic gun duel and now elected permanent sheriff, Tim playfully arrests Joice, sentencing her to a lifetime as his wife. McCoy was paid 4,000 dollars for each of his ten Westerns for Puritan, which were budgeted at between 10,000 and 12,000 dollars each. Above-average for an independent production, The Outlaw Deputy brought in a domestic gross of 80,000 dollars.

There are no critic reviews yet for Outlaw Deputy. Keep checking Rotten Tomatoes for updates!

There are no featured reviews for Outlaw Deputy at this time.