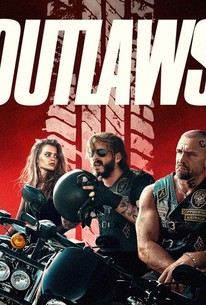 When an Australian motorcycle gang leader is released from prison, he finds his former deputy on the cusp of giving control of their lucrative drug trade to a rival gang. When the deal goes south, the ensuing violence threatens to spin out of control as the gangs must contend with external threats and subversion within their own ranks - culminating in a deadly face-off between the heavily-armed crews in this epic and action-packed biker thriller.

McCallum fashions an unremittingly vicious, leather-and-ink slugfest whose women are just as distasteful as its men.

This biker drama is little more than an endless stream of brooding, yelling, and "badass" posturing broken up by grisly violence and gratuitous sex scenes.

Movies about biker gangs are a genre inside a genre, and Outlaws puts its own boot on the neck of this leathery, lived-in material.

The pieces are in place, it never strays far from violence, and the whole thing looks ready to roll, and the result is...okay.

A copperhead is a venomous snake. It's also the name of a gang of West Australian outlaw motorcycle riders-the 1 per cent who are a paradox of the deadly and the fiercely.

'Outlaws' is an Australian biker throwback that throws back to some of the worst aspects of American exploitation cinema.

If you go into Outlaws expecting a polished and inoffensive ride then think again because this is brutal stuff designed to appeal on a primal level, which it does very well.

An amateur attempt at making a gritty, testosterone-infused thriller that ultimately implodes because of how serious it wants to be considered.

Without that nuance to rip their wounds open, though, it's tough thinking anyone but hard-drinking criminals already in an MC to crack skulls will find much appeal.

Beneath the abundant tattoos and facial hair, the gangsters - and the women who love them - feel like nondescript bit players from an episode of "Sons of Anarchy."

Outlaws is kind of like a modern-day interpretation of Macbeth that involves an Australian motorcycle gang ... The movie also ... is quite dumb.

There are no featured audience reviews yet. Click the link below to see what others say about Outlaws!