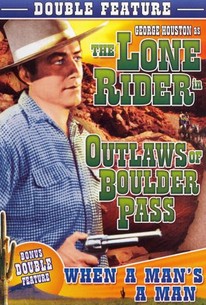 Handsome second-lead Dennis Moore took center stage in this entry in PRC's low-budget "Lone Rider" Western series. Moore, who played Sheriff Smoky Moore in previous entries, took a name change this time, to Smoky Hammer. Battling a gang of outlaws out to steal his ranch, Smoky discovers that he has a half-sister, Tess (Marjorie Manners), whose father was killed by her guardian, ranch foreman Clayton (Karl Hackett). Enter vigilantes Tom Cameron, aka "The Lone Rider," and his grizzled sidekick Fuzzy Jones (Al St. John), who once again help Smoky bring the villains to justice. The strapping George Houston, as always, took time out to serenade his leading lady, this time with "Let Me Keep Roamin' the Prairie" and "The Grass Is Always Green in Sunshine Valley," both courtesy of the studio's resident tunesmiths, Johnny Lange and Lew Porter. Manners stayed with PRC through 1945, appearing mostly opposite Larry "Buster" Crabbe. Comic sidekick St. John had become so identified with his scruffy character that he began billing himself Al "Fuzzy" St. John.

There are no critic reviews yet for Outlaws of Boulder Pass. Keep checking Rotten Tomatoes for updates!

There are no featured reviews for Outlaws of Boulder Pass at this time.