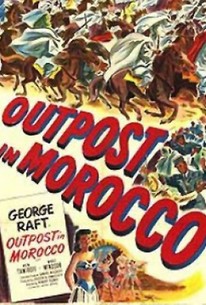 While under contract to Warner Bros., George Raft turned down picture after picture as being "unimportant" and thus unworthy of his talents. Among his turned-down projects were such minor items as High Sierra and Casablanca. By 1949, however, Raft's star had eclipsed, and he was obliged to accept whatever came along. Outpost in Morocco wasn't exactly a "B" picture -- it was expensively filmed on location -- but neither was it in the same league as Raft's earlier vehicles. Cast as Capt. Paul Gerard, a foreign-legion officer, Raft finds himself on the horns of a dilemma. He must protect his garrison from the rebel hordes of a native Emir (Eduard Franz) -- who happens to be the father of Cara (Marie Windsor), the woman Gerard loves. Akim Tamiroff easily steals the show as Gerard's slovenly second-in-command. The film truly comes to life only during the battle scenes, which utilize the services of hundreds of genuine Legionnaires and Moroccan cavalrymen.

Eduard Franz
as Emir of Bel-Rashad

Critic Reviews for Outpost in Morocco

Its star, George Raft, acts as if he would rather be in Brooklyn than filming in Morocco.

There are no featured reviews for Outpost in Morocco at this time.