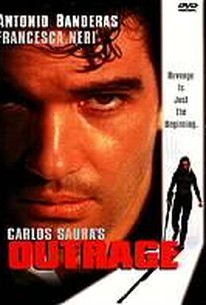 Antonio Banderas, who had previously appeared in Carlos Saura's STILTS (LOS ZANCOS), stars as Marcos, a Madrid newspaper reporter who becomes involved with a sensational murder investigation. Although generally known for more cerebral fare, in OUTRAGE Saura takes an emotional story of revenge and tells it in a straightforward style. Marcos is sent to do an article on Circus performers where he meets Ana (Francesca Neri), a trick horseback rider and sharp shooter. At first she is cool and distant, wanting him to pay her for an interview, but he gets her to agree to it in exchange for putting her picture in the paper. The last part of the story differs sharply from the love story. Ana is bothered during her act by three drunken young men who follow her to her trailer and sexually assault her. In the morning she takes her gun and goes out to take revenge on them.Until the climactic end Marcos and Ana have no more scenes together. He follows her actions from the newspaper and TV reports. She leaves frantic messages on his answering machine. This suspense technique, keeping the lovers apart as the action spins out of control provides and interesting ending to Saura's first attempt at the urban thriller genre.

There are no critic reviews yet for Outrage!. Keep checking Rotten Tomatoes for updates!

There are no featured audience reviews yet. Click the link below to see what others say about Outrage!!