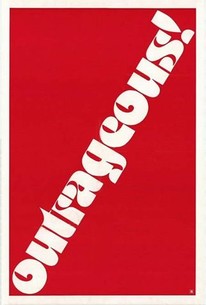 Two misfits find love and support in each other's company, in this show-business comedy with a twist. One of them, Robin Turner (Craig Russell), is a male hairdresser and a gifted female impersonator, who tries out his act in local gay nightclubs. His roommate is Liza Connors (Hollis McLaren), an old high-school friend who is now a mumblingly strange pregnant woman, recently released from a mental hospital where she was being treated for schizophrenia. She is determined never to return to the hospital again, and he wants to be a show-business success with his impressions. When Robin loses his job, the two determine to try their luck in New York.

Jackie Loren
as Herself

Michael Daniels
as Performer In Gold

Russell's act is intrinsically entertaining enough, and Miss McLaren's despair is convincing enough, that we forgive the lack of a subtler touch in the writing and direction.

[Director] Benner brings Outrageous through difficult terrain with admirable results. Gayness is treated naturally, sparing us from those tiring lectures usually found in "gay films." It's all very real, with a delightful mixture of comedy and drama.

A low-budget Canadian sleeper, Outrageous is a vastly entertaining and poignnat serio-coemdy about drag and gay life which became a cult movie among gay and straight viewers.

There are no featured audience reviews yet. Click the link below to see what others say about Outrageous!