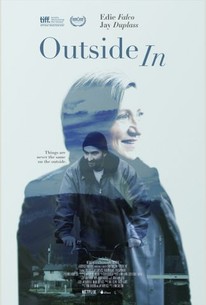 Critics Consensus: Brilliantly brought to life by tenderly empathetic performances from Jay Duplass and Edie Falco, Outside In tells a sobering -- yet thoroughly absorbing -- story.

Critics Consensus: Brilliantly brought to life by tenderly empathetic performances from Jay Duplass and Edie Falco, Outside In tells a sobering -- yet thoroughly absorbing -- story.

Critic Consensus: Brilliantly brought to life by tenderly empathetic performances from Jay Duplass and Edie Falco, Outside In tells a sobering -- yet thoroughly absorbing -- story.

After serving 20 years for the crime of essentially being in the wrong place at the wrong time, 38-year-old Chris (Jay Duplass) is granted early parole thanks largely to the tireless advocacy of Carol (Edie Falco), his former high-school teacher. As he struggles with the challenges of navigating the modern world as an ex-con, and with a fraught relationship with his brother Ted (Ben Schwartz), Chris ends up confessing his romantic love for Carol - a love that, given her marital status, Carol cannot reciprocate. Or can she? Carol longs for something her husband no longer provides. Meanwhile, Carol's daughter Hildy (Kaitlyn Dever) befriends Chris, finding a kindred spirit in this awkward, tormented older guy.

News & Interviews for Outside In

Ready Player One Is Certified Fresh

View All Outside In News

Critic Reviews for Outside In

Edie Falco gives her most vulnerable and nuanced performance...

Lynn Shelton wrote and directed two superior indie comedies, Humpday (2009) and Your Sister's Sister (2011)... Now she's back with an engrossing drama about love and circumstance, and there isn't a false note from start to finish.

What keeps Outside In interesting throughout is the nuanced work of its so very watchable leads - especially Duplass, who spent the first half of his career behind the camera writing, directing, and producing film and TV with his brother Mark.

Director Lynn Shelton brings a high empathic bar to Outside In, then dares the audience to clear it.

The power of these performances is that you leave thinking that Chris and Carol are out there, somewhere, and you wish them well.

[Lynn Shelton's] actors are always natural and unaffected, but in [Edie] Falco and [Jay] Duplass, she's found interpreters who seem to breathe her characters.

Lynn Shelton's sobering look at a young man struggling to survive following twenty years in prison is full of compassion.

Edie Falco is outstanding in this film, creating a memorable character of remarkable warmth and solid values.

Shelton's films are usually more comedic, but this one's bittersweet but hopeful tone works quite beautifully.

Shelton and ensemble capture all the nuances of this unpredictable and sometimes dangerous liaison between two admirable people who are trying their very best to do the right thing.

A transition that many women go through, and one that is even less represented onscreen. And it's tenderly and wisely handled.

Shelton has created a film that finds dramatic power and emotional resonance in the smallest, most seemingly mundane of moments.

Audience Reviews for Outside In

There are no featured audience reviews yet. Click the link below to see what others say about Outside In!