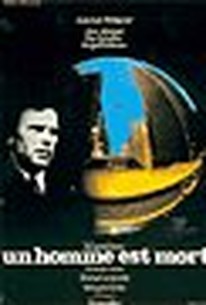 Un homme est mort (A Man Is Dead), (Funerale a Los Angeles) (The Outside Man) Photos

This French-produced thriller was shot entirely in English. Jean-Louis Tritignant stars as Lucien, a hit man who goes to Los Angeles to end the life of an important local mobster. The mobster's heirs, who hired Lucien, had already hired yet another hit man (Roy Scheider) to kill him. He speaks very little English, and the lifestyles and customs of Los Angelenos puzzle him completely. One of the films highlights is its use of many unusual decayed and shabby sites in the Los Angeles area, such as Venice Beach. ~ Clarke Fountain, Rovi

Lionel Vitrant
as Paul
View All

Critic Reviews for Un homme est mort (A Man Is Dead), (Funerale a Los Angeles) (The Outside Man)

Perfect casting for Trintignant as a French hitman imported to America and efficiently executing his contract, only to discover that there appears to be a contract out on him.

It is so amateur, so badly paced, so incredibly acted, so ridiculously padded, that The Outside Man" almost becomes memorable - with viewers wondering how anyone could have so ludicrously botched such a hands-down assignment.

A pretty fair pursuit melodrama for about 45 of its 104 minutes After that you might try strolling out to the lobby and watching the candy counter girls baste the hot dogs.

The Outside Man is a lifeless movie, bereft even of cult interest.

The story might be slight, but the acting by Trintignant is just right...

Audience Reviews for Un homme est mort (A Man Is Dead), (Funerale a Los Angeles) (The Outside Man)

Un homme est mort (A Man Is Dead), (Funerale a Los Angeles) (The Outside Man) Quotes