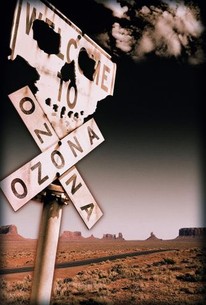 A group of strangers are brought together under unexpectedly dangerous circumstances in this offbeat drama. Trucker Odell Parks (Robert Forster) pulls into a diner in Ozona, Texas, for a cup of coffee, where a number of other weary travelers are taking a break. Wit Roy (Kevin Pollak) is an out-of-work clown trying to figure out how to get to Las Vegas on his last few dollars, where a job offer awaits; his girlfriend Earlene (Penelope Ann Miller), a one time stripper, is tagging along and thinks that she knows how to raise some money. Reba Twosalt (Kateri Walker), a Native American, is heading west with her Grandmother; the old woman is dying, and they would like to see the ocean together one last time. And Marcy and Bonnie (Sherilyn Fenn and Beth Ann Styne) are two sisters en route to the funeral of their father. As the customers eat their food and drink their coffee, the radio is playing vintage jazz and blues, a form of protest from the disc jockey, Dix Mayal (Taj Mahal), who is breaking the station's country and western format after being forced to work an extra shift by his boss, station manager Floyd Bibbs (Meat Loaf). However, there's a killer on the highway near Ozona, and very soon all of these people will find themselves crossing his path. In addition to playing the disc jockey, blues great Taj Mahal also contributed several songs to the soundtrack of Outside Ozona.

Fergie
as Girl
View All

Critic Reviews for Outside Ozona

I'm not sure what the movie thinks its purpose is; at the end, we are pleased with the outcome but not enlightened. But there are moments I will remember, and Cardone evokes a real sense for the deserted night highways.

So contrived and credibility-straining that it hardly satisfies.

An intriguing ensemble piece about strangers on the highway, dragged down by a lame religious serial killer subplot.

Audience Reviews for Outside Ozona

There are no featured audience reviews yet. Click the link below to see what others say about Outside Ozona!