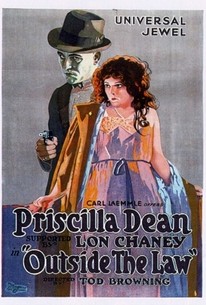 Outside the Law Photos

This suspenseful crime drama finds former mobster "Silent" Madden framed for a crime and sent to jail. His daughter Molly (Priscilla Dean) and her boyfriend joins the gang and the two pull off a jewel heist at a high-society event. The two have a showdown with the mob boss (Lon Chaney) that results in his murder, and the couple is sent to jail but are soon released when the stolen gems are returned. A former crook (E. A. Warren) uses his considerable influence to free the incarcerated duo. Lon Chaney plays three different roles in this film, his second under the direction of Tod Browning.

Stanley Goethals
as That Kid

Wilton Taylor
as Inspector
View All

Critic Reviews for Outside the Law

A wealth of Chinatown local color, Lon Chaney and one fascinating baby would make any photoplay worth seeing. Outside the Law has the additional attraction of Priscilla Dean.

A good idea, well worked out, an decidedly well acted by Priscilla Dean, Wheeler Oakman and the ferocious Lon Chaney. We recommend the picture to those who share our own dime novel tastes.

It doesn't quite have the personal touches that Browning's later films would have, but it's a strong entertainment nonetheless.

...the elaborate, stylized sets used to represent San Francisco's Chinatown are a delight as is the palatial "Spencer home" where a key scene takes place.

Those who like crook melodrama with scenes in Chinatown ave certainly going to like Outside the Law, for it is much bigger than anything of the kind we have seen.

It's lucky for the film that when Priscilla Dean isn't onscreen, Lon Chaney usually is, since those two are by and large the only humans that give it any kind of spice.

Audience Reviews for Outside the Law

A pretty good crime drama, I think Browning is better at horror, but this movie was enjoyable. The story is good, and the actors too, it's not great, but I liked it anyway.

Outside the Law Quotes