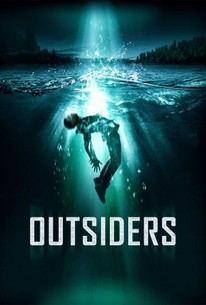 When high school student Jaylen Brown finds himself under suspicion after his classmate disappears during a party, prejudice quickly begins to boil to the surface of his small southern town as all fingers point toward him. Working against the clock to clear his own name, he begins to unravel a massive web of secrets that all point to otherworldly forces at play.

Critic Reviews for Outsiders (No Running)

There's little here to elevate the film beyond its good intentions.

'No Running' seeks to combine a sci-fi backdrop with a socially relevant premise. When one theme is dominant, things work. When they both try to co-exist, they don't mix as well.

In his energetic feature debut, Delmar Washington flirts with sci-fi, but primarily uses the notion of other life forms light years ahead of us to suggest how our own species has remained stuck in the past.

There are no featured reviews for Outsiders (No Running) at this time.