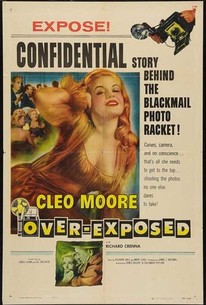 This forgettable piece of 1950s sleaze stars Cleo Moore as a voluptuous blonde who becomes a successful commercial photographer. Richard Crenna, making a major break from his TV image as Our Miss Brooks' Walter Denton, plays a reporter who takes a special interest in Moore's career. The beauteous picture taker becomes involved in a blackmail plot when she goes to work for a Confidential-type magazine, nearly losing her life to mobsters. It was the opinion of many contemporary reviewers that the title Over-Exposed referred not to the photographs taken by Moore but to the generous amounts of cleavage displayed by the actress' low cut gowns. Though Cleo Moore has become a "cult" favorite thanks to her appearances in the turgid melodramas directed by Hugo Haas, Over-Exposed demonstrates that her minimal acting talent vanished altogether without Haas' guiding hand.

Robert B. Williams
as Sergeant
View All

There are no critic reviews yet for Over-Exposed. Keep checking Rotten Tomatoes for updates!

There are no featured reviews for Over-Exposed at this time.