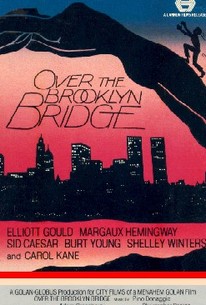 A man is torn between true love and the lure of fine dining in this romantic comedy. Alby Sherman (Elliott Gould) was born and raised in Brooklyn, where he runs a coffee shop. Alby has dreams of doing bigger and better things, and he works up the courage to ask his rich Uncle Benjamin (Sid Caesar) if he'd be willing to front him the money to open a gourmet restaurant in Manhattan. Benjamin, however, doesn't care for Alby's girlfriend Elizabeth (Margaux Hemingway), mainly because she's Catholic, and he makes Alby an unexpected offer -- he'll give him the money, but only under the condition that he breaks up with Elizabeth and marries a nice Jewish woman. The supporting cast features Carol Kane and Shelley Winters.

Jean Elliott
as Rosie the Receptionist

Christopher Wyncoop
as Lawyer
View All

Critic Reviews for Over the Brooklyn Bridge

Over the Brooklyn Bridge is Menahem Golan's most obvious and fortunate movie. [Full Review in Spanish]

Audience Reviews for Over the Brooklyn Bridge

Stupid fool acts like a spineless jackass for a little over an hour and a half. Some good performers are wasted in this dumb mess.

Over the Brooklyn Bridge Quotes