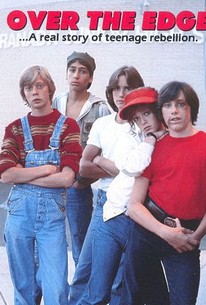 Over the Edge Photos

The protagonists of Over the Edge are the teen-aged offspring of the residents of a planned suburban community. This bland little town has been designed with conformity in mind, and with no thought of making the kids' lives worth living. Even worse, there is very little opportunity for any of the teens to grow "out" of the community and live elsewhere. Consequently, the kids rebel by drinking themselves sick, dealing in drugs, and indulging in deadly violence. Inasmuch as the local cops are predisposed to beat the teens into submission, the kids retaliate by directing their frustrations at the Law; the results are tragic, to be sure, but in no way predictable. Over the Edge struck as sensitive a nerve with young 1970s moviegoers as Rebel Without a Cause did with their 1950s forebears. Matt Dillon made his screen debut in Over the Edge, distinguishing himself in an ensemble cast that also includes Vincent Spano, Andy Romano, Ellen Geer, and Harry Northrup. The screenplay was written by Charles Haas and Tim Hunter; the soundtrack songs feature the Ramones.

Critic Reviews for Over the Edge

This allegory of an America ever under construction examines, in a nuanced, even-handed manner, the money-obsessed mindset of adults, parents and entrenched authorities no less than the hostile recalcitrance of errant youth on their road to nowhere.

Jonathan Kaplan's Over the Edge is a sensitive and deceptively shocking portrait of middle-class decadence and alienation set against an impersonal, dehumanized, futuristic Sunbelt society.

Script, photography and performances (including Dillon before he decided to become a teenage Stallone) are all top notch, while Kaplan directs with pace, imagination, and a fine ear for dialogue and music.

It tells a ragged story that ends with an improbable climax, but it's acted so well and truly by its mostly teen-age cast that we somehow feel we're eavesdropping.

It's to Mr. Kaplan's credit that he makes New Granada look just as boring and alienating to us as it does to the unfortunate children who live there.

Kaplan has a fine feel for the crushing blandness of "planned communities"-the anger that possesses his underage heroes proceeds from a physically oppressive emptiness, represented by rows of hollow town houses and vast, blasted fields.

This genre has spawned more unmemorable films than quality ones; sadly, Over the Edge falls into the former category.

If you were born around the same time as Matt Dillon, this period piece will amaze you with its attention to detail

Kaplan's film is a real treat - fair, cool, disturbing and graced by naturalistic performances from its vibrant young cast.

Audience Reviews for Over the Edge

Over the Edge Quotes