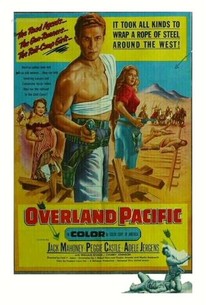 Billed "Jack Mahoney" for the occasion, former stunt man Jock Mahoney steps up to the plate as a leading man in this average Western originally released in an inexpensive color process. Mahoney plays Ross Granger, a railroad agent masquerading as a telegrapher and looking into a series of Comanche raids on the railroad construction near Oaktown. But as Ross quickly establishes, the raids are sponsored by local businessmen Del Stewart (William Bishop) and Broden (George Eldredge), who want to force the railroad through land they possess. Stewart, an old friend of Granger's, is in love with Ann Dennison (Peggie Castle), the daughter of the railroad surveyor, but not even he can prevent Broden from having old man Dennison (Walter Sande) killed. Jock Mahoney had recently starred on television's Range Rider series when hired by former Columbia Pictures colleague Fred Sears for this independently produced Western.

There are no critic reviews yet for Overland Pacific. Keep checking Rotten Tomatoes for updates!

There are no featured reviews for Overland Pacific at this time.