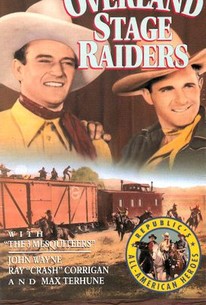 The "Three Mesquiteers"--John Wayne, Ray Corrigan and Max Terhune--find themselves in the modern-day west in Overland Stage Raiders. The "stages" being raided are actually Greyhound buses, bearing gold shipments to the east. Airborne hijackers steal the gold, but the Mesquiteers vanquish the crooks, then parachute to safety. Overland Stage Raiders represents John Wayne's second appearance in Republic's Three Mesquiteers series, but never mind that. The film's leading lady was former silent star and future cult- figure Louise Brooks, the hauntingly beautiful leading lady of G.W. Pabst's Diary of a Lost Girl and Pandora's Box, here making her last film appearance. When asked in later years why she would accept such an unprepossessing project, the no-nonsense Brooks replied that she needed the three hundred dollars. ~ Hal Erickson, Rovi

This Mesquiteer western looks like all the others except for the airplanes.

This is a movie only for John Wayne completists and Louise Brooks completists, and if you're both at the same time, it's a great day for you.

There are no featured reviews for Overland Stage Raiders at this time.