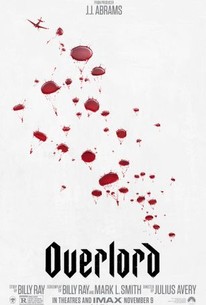 With only hours until D-Day, a team of American paratroopers drop into Nazi-occupied France to carry out a mission that's crucial to the invasion's success. Tasked with destroying a radio transmitter atop a fortified church, the desperate soldiers join forces with a young French villager to penetrate the walls and take down the tower. But, in a mysterious Nazi lab beneath the church, the outnumbered G.I.s come face-to-face with enemies unlike any the world has ever seen. From producer J.J. Abrams, Overlord is a thrilling, pulse-pounding action adventure with a twist.

10 Game-Changing Zombie Movies From the Last 10 Years
Best-Reviewed Movies by Genre 2018
You’re a Fresh One, Mr. Grinch… For Now

It escalates slowly, it builds, and then when you get to the final third of this film once the horror elements break out it's a thrill ride.

Overlord is to fact as Churchill was to sobriety, or Trump to modesty.

Enjoyable...I didn't care about a single character in this movie, and I didn't care who got blown up...I didn't feel invested, but it was action-heavy enough and well-acted enough to appreciate...once it commits, it's really entertaining.

It helps to be in the mood for a period Nazi zombie shoot-'em-up but it's very successful at being a bit of fun and bloody counterprogramming.

It's reasonably good, creepy fun, provided you're not troubled by fleeting, uncomfortable thoughts like "Hey, that screaming bloodthirsty mutant monster could theoretically be a reanimated Anne Frank."

Seems destined for cult status, though it's not hard to wonder how much stronger it would be if it stuck the landing.

There are sophisticated storytelling touches...

Overlord is a serious, scary, fun and gory sci-fi horror adventure. Good job I don't like my war films too real!

There's plenty of entertainment to be found in the undead mayhem, even if it could have benefitted from slightly more comic relief.

Overall, I enjoyed Overlord, even if I saw the limitations and overload of its action and excess become clearer as hour #2 unfolded.

The first 30 minutes are actually a pretty straight war movie in the tradition of Saving Private Ryan or Inglourious Basterds, even quoting those. The most unrealistic part of the beginning is a French woman speaking good English. Then we're going through a bit of a slow middle part as the little French town is set up before we're reaching the promised horror and splatter territory. But even during the trashy and silly last act, the film plays its "war caper" cards pretty straight, which is admirable. The result is pretty damn entertaining, sometimes even exciting. I merely expected a little more craziness or a somewhat more interesting caper. Still, well done.

A comer for classic right out of the gate, this sci-fi WW2 funhouse is a monster itself, ("it's aliiiiive!"), borrowing familiar genres and sowing them together to create a lumbering juggernaut that's fresh while still remaining strangely familiar. Re-watchable? Again and again.

The movie can be quite tense and thrilling, and it is funny that, while not very bright, the main character is lucky enough to stumble on information after information by pure chance and not get killed after thirty minutes - which makes everything even more fun to watch.

It's a rarity that movies like this are made today. Original concepts are either tampered with by a studio or forced to change in order to fit a franchise or set up an entire universe of movies. It's rare that filmmakers in Hollywood (these days) are given complete freedom to create the movie they want to create, or so it seems. Happily, after watching Overlord, I noticed none of that. While the subject matter may not interest a large audience, I believe this movie can be enjoyed by fans of many genres. If you have an open mind, whether you're a fan of war films, sci-fi films, or a good old fashion slasher/horror, I think Overlord may impress you as much as it impressed me. From start to finish, here's why I believe it's very hard for audience members to get bored with this one. Nearing D-Day, American soldiers are being flown into the battlefield. After their plane is shot down, they form an unlikely ally, while one of them begins to discover that the Nazis have been kidnapping Americans and experimenting on them in bizarre ways. This movie asks a lot of you throughout the second and third acts, as it sets it up as a war film, but pulls the rug out from under you as the movie progresses. As I mentioned, this film is part war, part sci-fi, and part horror, and those genres surprisingly blend together very well and this movie never keeps you waiting. The pacing of this film is easily the aspect that stood out the most to me. A premise like this can easily be chuckled at, but the fact that it begins as a war film, turns into a sci-fi film, and ends up being a horror movie, makes for a very interesting experience. From the second this film started, I felt riveted. Whether you're into an action sequence, a comedy bit, or on the edge of your seat to see who will make it out alive, there's absolutely no downtime. I'm not saying some movies don't need or deserve to be three hours long, but this is a perfect example of a film that utilizes the perfect amount of time needed to tell its story. Giving just the right amount of characters development to most of the crew, just the right amount of horror to not turn off the action junkies who just came for that, and hardly any drawn-out scenes of characters conversing, at 105 minutes, there isn't a single moment where you can take a break and then come back, not having missed something. Although Julius Avery does a very solid job in terms of direction, it's the combination of a tight script by Billy Ray and Mark L. Smith and the frenetic editing by Matt Evans that truly shine here. To me, the overall outcome of the pacing of this film originated with those two elements. On top of that, you have a great cast to keep your audience engaged. While I haven't heard of many of these performers in the past, I can see them receiving quite a few jobs in the near future. For what this film was trying to be, I really can't find many things to complain about here. In the end, Overlord shocked me with how much I actually enjoyed it. The premise itself should make for a bad On Demand release that most people would forget about, but there's a lot of effort put into this movie. The overall story itself may be its biggest issue, due to the fact that there are flaws within the plans of what the Nazis are plotting, but that was a minor nitpick in the grand scheme of things. Personally, I was on the edge of my seat from start to finish and I highly recommend this movie to those who can handle the three genres of war, sci-fi, and horror. Overlord is tightly paced and full of energy.