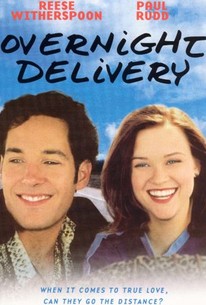 In this romantic comedy, a college student thinks his beloved has been untrue, so he writes her a harsh letter. Unfortunately for him, he doesn't learn the truth until after he mails the damning missive. The fun comes as he frantically attempts to arrive at her domicile before the letter.

Kurt Schweickhardt
as Cop No. 1

Bill Schoppert
as Officer No. 1

Matthew Klemp
as `The Ricker'
View All

One of my favourite films...such spark, such giggles

No shame needs to be attached to a public recounting of Overnight Delivery, a masters class entry in the comedic canon of fitfully mismatched twentysomething romances.

Arrives on DVD a day late and a dollar short

I liked this movie. Paul Rudd stars as a man who wrote a mean letter to his g/f. He has second thoughts about it, so he's on a road trip with Reese Witherspoon to stop the delivery. Will they fall in the love on the way ? Of course, it's friggen Reese Witherspoon!