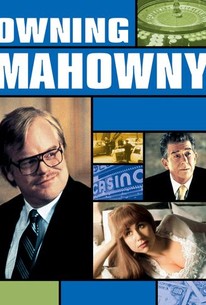 Critics Consensus: This story of addiction may lack the typical flash and glamour, but Hoffman makes Mahowny compelling.

Critics Consensus: This story of addiction may lack the typical flash and glamour, but Hoffman makes Mahowny compelling.

Critic Consensus: This story of addiction may lack the typical flash and glamour, but Hoffman makes Mahowny compelling.

Brian Mahowny was a rising star at the Canadian Imperial Bank of Commerce. At twenty-four he was assistant manager of a major branch in the heart of Toronto's financial district. To his colleagues he was a workaholic. To his customers, he was astute, decisive and helpful. To his friends, he was a quiet, but humorous man who enjoyed watching sports on television. To his girlfriend, he was shy but engaging. None of them knew the other side of Brian Mahowny--the side that executed the largest single-handed bank fraud in Canadian history, grossing over $10 million in eighteen months to feed his gambling obsession.

Whether or not you think of gambling as a vice, you can bet on Owning Mahowny.

Owning Mahowny is an unflashy but fascinating meditation on addiction and greed.

A motion picture that never ceases to be worthwhile.

This is a small story, as quiet and unassuming as its main character. And, like Mahowny, it makes few wrong moves and quite a few right ones.

Despite its intelligence, it's dreary and uninvolving, more an exercise in style than an act of love.

Through it all, Hoffman plays Mahowny with no glamor or glitz, but with a type of studied vacuousness that's chilling.

There's not much to root for one way or another, not much tension across the film's admirably tight runtime.

The drama is a narrow, one-way street. And Hoffman is no Russell Crowe or Leonardo DiCaprio. He's just a brilliant American actor playing a repressed Canadian with a weakness for numbers.

...a movie that rejects the pyrotechnics, glamour and spectacle-mongering of mainstream Hollywood yet manages to engage, connect and transfix.

Watching Hoffman completely give himself over to his addiction is pretty draining. Although the film has a subtext ... it's basically a ride down to the bottom with an addict.

hoffman creates a character who is trapped in a downward spiral of addicition. this is one interesting film that went unheard of. hoffman is criminally underrated and this role is proof of that

Philip Seymour Hoffman is great as the gambling-obsessed Bank Manager. It's really suspenseful and fascinating watching his gambling getting waaay out of control.

I'm laughing so hard after reading the following "What do you think?" from The Onion. [font=Courier New][color=red]WARNING! CLICK AT YOUR OWN RISK! HUMOR IS HIGHLY INAPPROPRIATE, AND WON'T BE FUNNY FOR SOME![/color][/font] [url="http://www.theonion.com/wdyt.php?i=1"]Colorado Football Under Fire[/url] [url="http://www.theonion.com/"]www.theonion.com[/url] Hilarious, yet oh so wrong. And it's even about my alma mater's school scandal. So I'm gonna watch 'The Passion Of The Christ' tomorrow night. I really can't wait, even after reading all these negative reviews. If anything, they're only further increasing my confidence in this film's power. In other news, I'm really craving donuts right now. Damn.