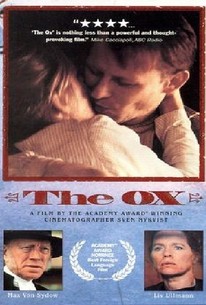 Based on a true story, the bleak period piece Oxen was co-written and directed by Ingmar Bergman's longtime cinematographer Sven Nykvist. In the small village of Småland in the late 1860s, Helge Roos (Stellan Skarsgård) works as a farmer on an estate belonging to Svenning Gustafsson (Lennart Hjulström) and his wife (Liv Ullmann). Plagued by a terrible famine, Helge illegally kills one of the Gustaffson's last oxen so his own family can eat. He and his wife, Elfrida (Ewa Fröling), feel guilty about it, but the meat keeps them alive through the winter. When he tries to sell the hide in the spring, a clergyman (Max Von Sydow) finds out and encourages him to confess. The judge sentences Helge to a life of manual labor at the state prison for his crime. When he is finally pardoned and released after six years, he returns home to Elfrida to find out that she has been supporting the family by performing sexual services, which has resulted in the birth of another child. In the 1970s, Von Sydow and Ullmann appeared together in a set of films also dealing with the Swedish famine in Jan Troell's The Emigrants and The New Land.

Björn Gustafson
as Officer in command

Rikard Wolff
as Johannes
View All

Critic Reviews for Oxen (The Ox)

Comparisons with Bergman are inevitable, but the guilt and religious intolerance have more in common with the soulful austerity of Carl Dreyer. It's an original, and ought to be seen.

There are no featured reviews for Oxen (The Ox) at this time.