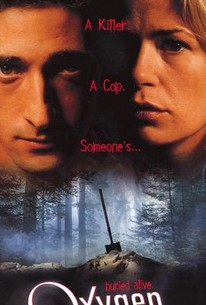 A police detective is on the trail of a psychopath while dealing with demons of her own in the crime thriller Oxygen. Madeline Foster (Maura Tierney) is a plainclothes detective with the NYPD who isn't especially happy with her job. She drowns her sorrows in alcohol and masochistic sex, though even her husband (Terry Kinney) is unaware of the full extent of her erotic obsessions. Madeline finds herself assigned to investigate an unusual kidnapping; Frances (Laila Robins), the wife of a prosperous businessman (James Naughton), has been kidnapped and buried alive. The perpetrators demand the ransom be paid within 24 hours, or the air will run out and Frances will be dead. Madeline surmises that the kidnapper is a career criminal known to the NYPD as "Harry Houdini" (Adrien Brody) for his remarkable ability to escape capture. It soon becomes clear that "Harry" knows who Madeline is, and for him this isn't an ordinary kidnapping but an elaborate psychological game; he is convinced they are alike in more ways than they're different, which makes it all the more fascinating for him. Oxygen received screenings at several 1999 film festivals, including Taos, Gen-Art and Cannes (market); it was later purchased by premium cable network HBO, who showed the film before it went into a limited theatrical run.

Robert Shepard
as Sal the Bartender

Gene Canfield
as Joe the Cop

Judy Goldschmidt
as Judy the Cop

Bernard McClain
as Byron the Cop

Ernie Blackman
as Dentist No. 2

Ted Neustadt
as FBI Agent No. 1

Bruno Gidello
as FBI Agent No. 2

Tierney definitely has what it takes to carry a film; it's unfortunate that this vehicle doesn't give her much of substance to carry.

A well-performed, well-written edge of the seat thriller

Brody gives the performance of his career, so far.

I'm often asked why I waste my time watching independant films. It's true, that many of them are a complete waste of time, but what I really enjoy about them is that it gives people the freedom to do what they want, without Hollywood turning it into something it's not, and occasionally, I find a movie like Oxygen. This film was just your ordinary story of the police fighting against the clock and an insane criminal, who gets off on fucking with them. It had a few twists here and there, but in general it was a very basic story, however what I did focus my attention on was the cast. Being that it's an independent film, two performers who I really enjoy watching, got to step away from their usual roles and try something different. Maura Tierney is usually cast as the emotionless girl with a troubled past, but in Oxygen, she's this crazy, self-loathing, tough as nails cop, who wears her emotions on her sleeve. She's opposed by Adrien Brody who usually plays the sweet, good-looking, exotic stranger, but not this time. In this film, Brody is a deranged psychopath who will do anything and everything to get what he wants. The dynamic and chemistry were both fantastic and I loved seeing two actors, that I know very well, step away from their usual roles and work on something different. If I hadn't seen both stars in a ton of things prior to this, I may not have been as entertained by this film, as the story is common, and very little is unpredictable, however the performances were tremendous and Tiereny and Brody compliment each other perfectly.

CAST: Maura Tierney, Adrien Brody, Terry Kinney, James Naughton, Laila Robins, Dylan Baker, Paul Calderon DIRECTED BY: Richard Shepard SUMMARY: This made-for-cable mystery thriller stars Adrian Brody as an escape artist-kidnapper whose method of torture involves burying his prey alive. When he strikes again, Maura Tierney is the policewoman who must track down Brody within 24 hours before he lets the air out of another one of his victims' hiding places. MY THOUGHTS; "It is definitely like a nightmare come true, being buried alive... This movie was good.. It's got Adrien Brody, who in my opinion played bad very good.. Didn't really look like he could pull it off to me.. But he ended up proving me wrong.. I say his portrayal of his character is what kept this movie afloat.. There was a bit of over acting from Terry Kinney, or maybe I just didn't like his portrayal of the husband. Just didn't seem to fit. Maura Tierney was good as the dark cop. All in all it wasn't a bad watch to find flipping through the TV today. I am still a bit worried that I thought the part where they found the dog was funny? I don't know, I just found Adrien to be a funny psychopath. Anyways, this movie is worth the watch if you come across it."

A psychopath who dubs himself Harry Houdini (Adrien Brody) kidnaps the wife of a rich businessman, strips her, and buries her alive in a coffin with about an hour's worth of air, demanding a million dollars in cash in return for which he will reveal her location. If the ransom isn't paid, or the police are involved, 'Harry' will not give up the details... the husband gets the police involved. The detective investigating, Madeline (Maura Tierney of Scotland PA, Diggers and ER fame) is now the only one who can try and solve the case. A damaged masochist with a drink problem, she'll have to think like Harry in order to find the burial site before the oxygen runs out.

Opening with a kinetic chase through a subway train, Oxygen immediately makes an impression. Its greatest asset is the well thought out characters, who so clearly have had lives before the film begins. In particular, Madeline is an absolutely fascinating protagonist and the bits of information we get build into something that makes the dénouement doubly exciting. The premise is excellently handled but this isn't a one-trick pony of a film and the sub-plots are equally well executed. Maura Tierney and Adrien Brody both give refreshing performances (a sort-of skew on the Hannibal/Clarice relationship in Silence of The Lambs) and the supporting cast (which includes Terry Kinney and Dylan Baker in a small role) is decent. The low budget is occasionally evident (a car-chase through New York City isn't exactly high-speed) but higher production values might have resulted in something more sensationalist and less imaginative. In any case, this is a solid, exciting little flick.