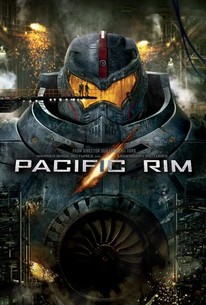 Critics Consensus: It may sport more style than substance, but Pacific Rim is a solid modern creature feature bolstered by fantastical imagery and an irresistible sense of fun.

Critics Consensus: It may sport more style than substance, but Pacific Rim is a solid modern creature feature bolstered by fantastical imagery and an irresistible sense of fun.

Critic Consensus: It may sport more style than substance, but Pacific Rim is a solid modern creature feature bolstered by fantastical imagery and an irresistible sense of fun.

When legions of monstrous creatures, known as Kaiju, started rising from the sea, a war began that would take millions of lives and consume humanity's resources for years on end. To combat the giant Kaiju, a special type of weapon was devised: massive robots, called Jaegers, which are controlled simultaneously by two pilots whose minds are locked in a neural bridge. But even the Jaegers are proving nearly defenseless in the face of the relentless Kaiju. On the verge of defeat, the forces defending mankind have no choice but to turn to two unlikely heroes-a washed up former pilot (Charlie Hunnam) and an untested trainee (Rinko Kikuchi)-who are teamed to drive a legendary but seemingly obsolete Jaeger from the past. Together, they stand as mankind's last hope against the mounting apocalypse. (c) Warner Bros

Heather Doerksen
as Lt. A. Kaidanovsky

The Freshest Films of Best Director Guillermo del Toro
Ranking 26 Giant Robots From Film and TV
Ant-Man And The Wasp Scheduled for 2018, Furious 8 Gets a Director, and More Movie News

Del Toro is a dreamer. He's a visionary. If you give him a pile of money to make enormous robots fight enormous monsters at the end of civilization, he will work to make Pacific Rim a movie that makes you feel all the enormousness.

Pacific Rim is a special-effects behemoth, a toy franchise with a deafeningly loud movie attached -- Transformers with an A-level.

In essence, Pacific Rim features a series of Godzilla monsters battle an ever dwindling number of Transformers, layered over the plot from Independence Day, only dumber.

Feels like it's always struggling to break through the screen-if only to grab you by the scruff of the neck and drag you in.

It is possible to applaud Pacific Rim for the efficacy of its business model while deploring the tale that has been engendered -- long, loud, dark, and very wet. You might as well watch the birth of an elephant.

As adventures in mechanised mayhem go, the picture does, of course, crush the Transformers franchise into iron filings.

The carnage causes both tremendous destruction and a good amount of entertainment.

That rare live-action film that actually justifies catching it in 3-D.

This movie is like the grown up version giddy young boys on a playground, smashing their toys into each other, making explodey noises with their mouths. It's big, loud, there's not much more to it than that, and it is exactly as much fun as it sounds.

Del Toro has crafted a film that is much more than just the Godzilla versus Robotech summer blockbuster it would have been in lesser hands ... it may not be the greatest story del Toro has ever [told], it's ... better than most blockbusters have.

Del Toro creates a cinematic universe with its own rules that reaches the point of amazement with the explosive action sequences. [Full review in Spanish]

Story and cast isn't much, but doesn't have to be in this particular case.

A dazzling visual spectacle that combines top-notch visual effects with a lot of fun in a way that should make any Michael Bay ashamed - and Del Toro employs a large depth of field for most of the movie, which makes it look amazing in IMAX 3D, even if it is converted.

In the wrong hands, ''Pacific Rim'' would've been a massive misfire. However, with visionary Guillermo del Toro at the helm, the result proves to be a satisfying blockbuster with great action, high stakes and likeable characters.

It is strange that despite the fact that there was a lot going on, I felt terribly bored. I was constantly checking my time and was more entertained by my popcorn than anything else. Pacific Rim offers nothing in the line of story and character. It is also upsetting that it tries to get dramatic when it should've stayed clear from that department. All of the battle scenes were in a dark and rainy environment, making them difficult to watch. This was a predictable mess of a movie, and I am astounded to see it get such positive ratings. Had Michael Bay's name been on the movie instead of del Toro's I am almost certain this would've flopped.