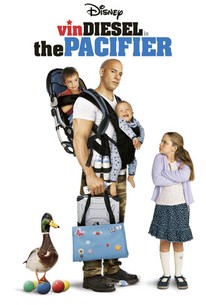 Critics Consensus: Vin Diesel parodies his tough guy image for the family audience, but the result is only moderately amusing.

Critics Consensus: Vin Diesel parodies his tough guy image for the family audience, but the result is only moderately amusing.

Critic Consensus: Vin Diesel parodies his tough guy image for the family audience, but the result is only moderately amusing.

As an elite member of the world's fiercest and most highly trained fighting force, Navy SEAL Shane Wolfe thought he was prepared to take on any duty, no matter how perilous or impossible... until he tried baby-sitting. Assigned to protect the five out-of-control children of an assassinated scientist, who had been working on vital government secrets, Shane is suddenly faced with juggling two outrageously incompatible jobs -- fighting the bad guys and keeping house. Replacing his usual arsenal of wetsuits and weapons with diapers and juice boxes, Shane not only must battle a deceptive enemy but wrangle teen rebel Zoe, sullen 14-year-old Seth, eight-year-old Ninja-wanna-be Lulu, as well as three-year-old Peter and baby Tyler -- not to mention their off-beat Romanian Nanny. He's truly a SEAL out of water, and now it's up to this one-time lone warrior to take on the most important mission of his life: keeping a family together.

Robert Bastens
as Vin Diesel Stand In
View All

News & Interviews for The Pacifier

View All The Pacifier News

Critic Reviews for The Pacifier

A crass, crude, and overly-familiar comedy.

Per its title, The Pacifier will lull you to sleep.

At one point, Diesel literally wades into a rancid sewer and emerges covered in feces, an image that sadly doubles as a metaphor for his career.

Fails on both an emotional and comedic level.

Diesel seems to talk at half-speed most of the time, and doesn't exactly have a natural comic sensibility, but he works hard with a cast of great kids.

I realize Walt Disney Pictures markets for the family, but is necessary to dumb down the story this much?

The Pacifier -- cute and cuddly, mind-numbing, cotton candy guaranteed to pacify everyone in the family.

Though it does have a talented cast with occasionally charming moments, it's still bad, and brainless.

It might have been a good career move for Diesel, who cut his teeth on high-octane action, but the script needs a lift and the direction feels lackluster.

Diesel has amply shown his star presence already, and he may even have a flair for comedy (if Hulk Hogan did, why shouldn't he?), but he gets no chance to prove it here.

It's almost as if the writers got carried away with brainstorming all the funny things they could do with Vin Diesel's character.

Audience Reviews for The Pacifier

The Pacifier sucked, it was boring, badly acted, and terrible action, and one of the worst films ever made.

Hysterical. Vin Diesel played a fantastic nanny and it's a nice heartfelt film that will have you smiling from start to finish.

Vin Diesel doesn't manage to achieve maximum hulkage in this, but he follows the career of Arnold and gets in touch with a younger audience. It's a fun movie that does have it's corny moments, but most of the time it's Vin Diesel causing trouble and being mean to kids. What's really scary is when he becomes a caring and understanding person, this is uncharted territory for Vin Diesel. Somehow he manages to pull it off and save the day.