Pack Up Your Troubles1932 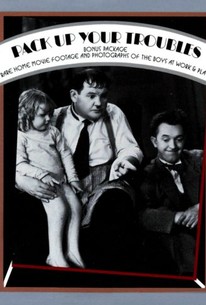 Pack Up Your Troubles Photos

Though not a remake of the same-named 1932 Laurel & Hardy comedy, 1939's Pack Up Your Troubles shares the earlier film's WWI setting. The Ritz Brothers star as a trio of luckless vaudevillians whose Dutch-dialect comedy act goes over like a lead balloon during the "Hate the Hun" era. Unable to find show-biz work, our heroes join the army, and within a twinkling are assigned to a mule battalion in France. Here they make friends with Collette (Jane Withers), an American girl whose daddy Hugo (Joseph Schildkraut) is an officer in the French army. While performing their Dutch act in a tavern, they are mistaken for Germans by a group of angry Frenchmen. Making their escape in a balloon, the Ritzes land behind enemy lines, where they are lauded as heroes by the German high command. As a result, the boys find themselves in an Allied POW camp, mistaken for German spies! They manage to redeem themselves by taking flight in the balloon once more and capturing a German officer. The opening sequence, wherein the Ritz Brothers audition their routine in a Broadway booking office, is the funniest scene in the picture; after that, things aren't particularly Ritzy, and it is understandable why Pack Up Your Troubles was the team's final film for 20th Century-Fox.

Grady Sutton
as Eddie the Groom

Muriel Evans
as the Bride

James Finlayson
as the General

Frank Rice
as Parkins the Butler

Nora Cecil
as Officers in the Eastside Welfare Association

Dick Gilbert
as Jerry, Grubby Friend of Cramer
View All

Critic Reviews for Pack Up Your Troubles

Has enough original slapstick bits that work to patch together a pleasing blend of comedy and melodramatics.

Audience Reviews for Pack Up Your Troubles

There are no featured audience reviews yet. Click the link below to see what others say about Pack Up Your Troubles!

Pack Up Your Troubles Quotes