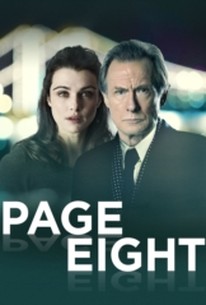 Johnny Worricker (Bill Nighy) is a long-serving M15 officer. His boss and best friend Benedict Baron (Michael Gambon) dies suddenly, leaving behind him an inexplicable file, threatening the stability of the organization. Meanwhile, a seemingly chance encounter with Johnny's striking next-door neighbour and political activist Nancy Pierpan (Rachel Weisz) seems too good to be true. Johnny is forced to walk out of his job, and then out of his identity to find out the truth. Set in London and Cambridge, PAGE EIGHT is a contemporary spy film for the BBC, which addresses intelligence issues and moral dilemmas peculiar to the new century.

Bill Nighy is the hushed engine of the film, just as Rachel Weisz is asked to be the emblem of a vein of decency and commitment that is worth defending.

I felt stuck on the outside, while the characters went through their paces secretly understanding everything that was at stake.

It's the right cast in the right setting but with a wrongfully righteous script.

I'd happily watch this cast read the phone book, but fortunately the script by David Hare (who also directed) is intelligent, engaging and generally makes good use of this singular cast's talents.

Even though there may be a fleeting moment when you feel an urge to slap Mr. Nighy and yell: "Perk up," in truth he can do no wrong here.

The post-Cold War evolution of MI5 is a potentially juicy subject, but while Hare lines up the elements, he fails to take the story anyplace especially revelatory or combustible.

For a "spy thriller" there is zero violence, zero running, zero screaming and only minimal double crossing-the whole thing is rather civilized and zingy.

Although it gives off the appearance of homework, Nighy and his fellow performers give Hare's script a thrilling workout, creating significant tension out of the most routine of encounters.

...a passable yet disappointing contemporary thriller.

Page Eight is a lean political thriller that is as enthralling as it is intelligent.

TV spy drama with a great set of A-list actors but with wooden acting from the protagonist and poor dialogue all around, yet the story becomes quite enticing an hour in and I quite enjoyed it.

Rather dull. Slow...good cast, though.

A MI5 agent uncovers a conspiracy that goes to Downing Street and may have caused the death of his best friend/boss. If you've seen the British version of State of Play, then you've already seen the feel and basic content of this film. This difference is that the conflict in the film has lower stakes, and the conspiracy does not seem as far-reaching and damning. Bill Nighy delivers another strong, understated performance, like the ones in State of Play and Gideon's Daughter. His work for British outlets seems so much more complex than what he does in American films. Overall, this film is good, but it's a poor man's version of stronger British political dramas.

Page Eight is a disappointing talky, thriller that is still worth the time of any intelligent film goer who laments that complex films about ideas are not in theaters anymore and wind up on PBS Masterpiece Theater. It's worth seeing for wonderful dialogue by one of Britain's best living playwrights, David Hare (in his directing debut) and superb cast, all at the height of their powers (hence my disappointment of the overall effect of the film.) Bill Nighy's deadpan, minimalist performance as a burned out spy is searingly memorable, as it that of Michael Gambon, as the current MI5 director. Rachel Weisz acquits herself well, but has few acting challenges as a publisher from a politically active mourning her murdered brother and wanting answers. Judy David chews scenery as a hard core opportunistic M15 rival of NIghy's. We are in 2011, but this film feels dated, and would have been timely for a early Bush/Blair era thriller circa 2003. Ralph Fiennes plays a Blair type weasel-y prime minister in one and a half scenes. The dialogue and relationships are more interesting than the international espionage intrigue and most of the those twists can be spotted a mile away. We've been there, done that, particularly in the more entertaining and surprising Ghost Writer, the Roman Polanski vehicle for Ewan Macgregor and Pierce Brosnan (The Blair of that film). Hare directs well, and the film is visually appealing - if a bit static. There is zero action and if you require that, stay away. Polanski's film looks like Michael Bay's transformers next to this one. Rent it if you need to spend time with great actors and use your brain, and can live with the knee jerk anti-Americanism and obviousness of its content.