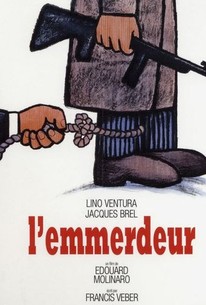 A Pain in the A** (L'Emmerdeur) Photos

Proof of the success of French filmmaker Edouard Molinaro is the fact that several of his home-grown hits have been remade as American films. The most recent example of this is 1996's The Birdcage, a highly profitable reworking of Molinaro's La Cage aux Folles (1978). The director's 1973 comedy A Pain in the A... also went the Cage aux Folles route of enjoying worldwide popularity, then undergoing an Americanization process. In the Molinaro original, Lino Ventura plays a friendless hit man who holes up in an Italian hotel room, awaiting the opportunity to knock off his target, a mob witness. No sooner has Ventura drawn a bead on his would-be victim than he is interrupted by the comically suicidal Jacques Brel, who wants to jump from the open window in the assassin's room. The banter and byplay between Ventura and Brel is priceless, especially when veering towards the "sick" humor that Molinaro handles so well. Based on a play by Francis Veber, Pain in the A... was remade by Billy Wilder as Buddy Buddy (1978), with Walter Matthau as the hit man and Jack Lemmon as his unexpected guest.

Pierre Collet
as The

Critic Reviews for A Pain in the A** (L'Emmerdeur)

French comedy today is simply the best. Mel and Woody, eat your hearts out.

There are no featured reviews for A Pain in the A** (L'Emmerdeur) at this time.

A Pain in the A** (L'Emmerdeur) Quotes