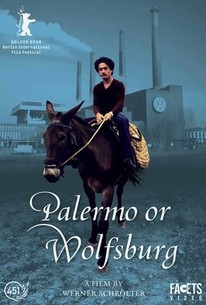 An impoverished young man from Sicily travels to Wolfsburg, West Germany to find work. He takes a job in the Volkswagen factory after he travels through Northern Italy by train. The young man is arrested after he kills two Germans with his knife when they question his honor. The third part of the film follows his subsequent trial and deals with justice denied and the attitude of many Germans who resent the influx of foreign labor. ~ Dan Pavlides, Rovi

... Schroeter isn't after an emotional experience but an intellectual engagement, explored with an expressionism that leaves the studied realism of the opening scenes far behind.

There are no featured reviews for Palermo or Wolfsburg (Palermo oder Wolfsburg) at this time.