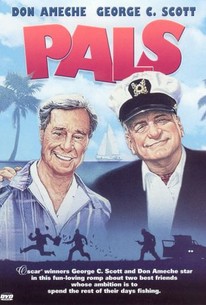 The "pals" of the title, played by Don Ameche and George C. Scott, are Army chums living a sedentary retirement. Occasionally the twosome becomes a threesome when Scott's mother Sylvia Sidney shows up. All three are resigned to living out their lives on fixed incomes in a Georgia trailer park-and then, Ameche and Scott discover a large sum of money in an abandoned car. Well, "large" is putting it mildly: they find nearly four million bucks. They also find a heap of trouble when mobster James Greene, who'd stashed the cash in the first place, starts nosing around. The made-for-TV Pals was originally telecast February 28, 1987.

Lou Walker
as Mailman
View All

There are no critic reviews yet for Pals. Keep checking Rotten Tomatoes for updates!

Lame comedy is helped by the old pros in the cast but even they can only do so much with the weak material handed them,